(19 May 2014)  The following five posts from the archives of my old blog tell the story of how and when I began the design work on my quilt “Waiting…” which I finished this year.  It so far has been a semifinalist in Mid-Atlantic Quilt Festival 2014, was shown at HMQS 2014, and has just been juried into AQS Charlotte.  This is not the whole story of the making of this quilt, and my next “From the Archives” later this week will continue the saga.  Pay attention to the dates as you read through this set of blogposts.

——–
TITLE: Buddings of a new idea for a quilt

DATE: 10/14/2011 1:31:01 PM
—–
BODY:
Sometimes a quilt concept is kind of like a flower.  It starts as a kernel of thought and grows until I start to really begin to see it in my head, but as I work through it, it takes on some different colors and shapes and ideas.  I have had this idea about a storm at sea for some time.  It seems really hard to do, but today I managed to come up with a beginnings of a concept.  I may change the stormy ship scene and I would add some angelina fibers along the edge where the pieced part joins the stormy picture to make it look like waves or something, but I drew this concept using a combination of EQ7 (designed the storm at sea using their blocks, placed fabrics I wanted in it, exported it as a jpg file) and Photoshop elements (using layers, erasers and so forth).  The sea picture is from Dover’s 120 Great Maritime Paintings, and is kind of an idea place holder at the moment.   What do you think of this concept?  Have I described it well enough? 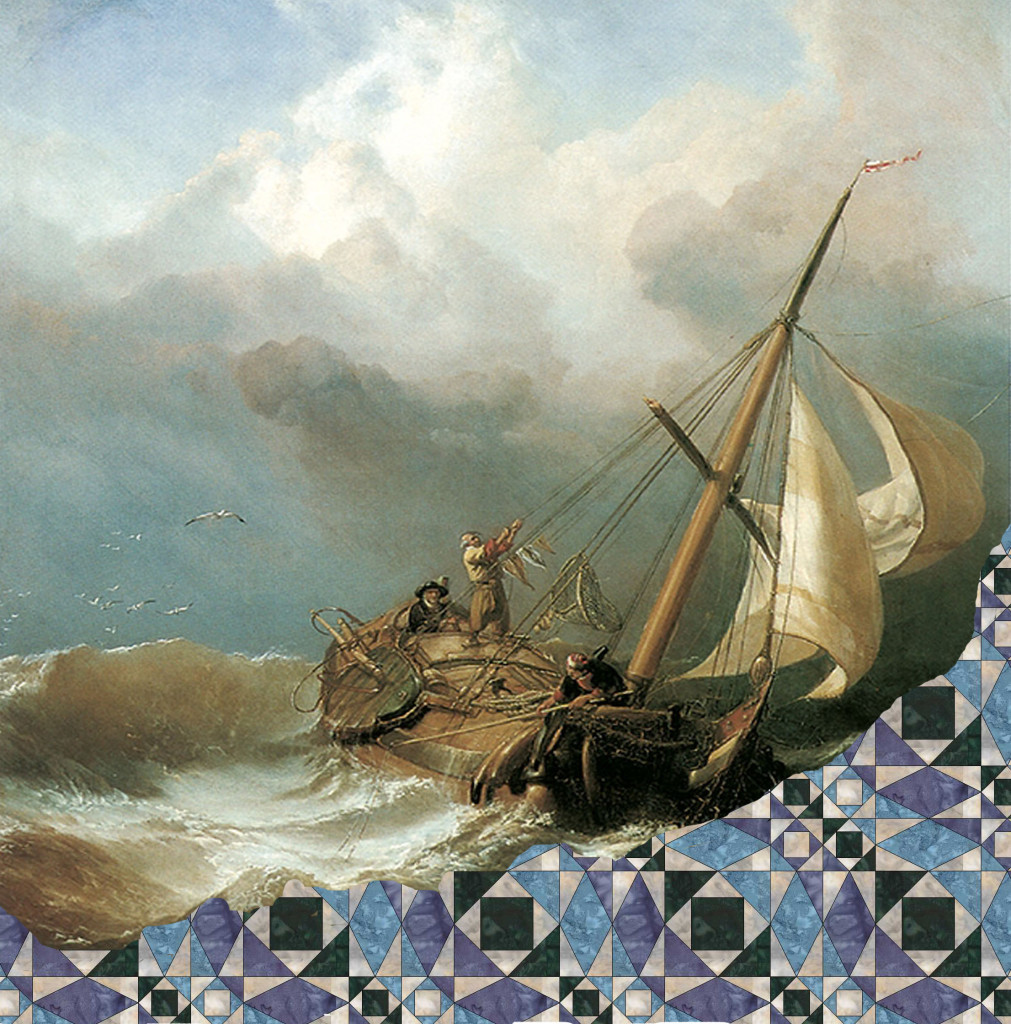 Anyway, All I can say about the first week in this new adventure is that it is truly amazingly interesting and fun, even if I did cut my finger cooking and am disappointed with the sky quilting in my Knight quilt…I didn’t cut it badly enough for stitches, but bad enough to interfere with my quilting.  Still, altogether a great first week!
Have a wonderful weekend, and comment on my idea if you would please.

I am still working on my fairy garden, but the wind storm we had the other day  made me consider starting work on my Storm at Sea also.

I like to keep about two designs going at once so if I get a little discouraged or tired of working on one, I can move to the other one. It works best for me to have two entirely different atmospherics for simultaneous projects.

I have several elements in my idea for this quilt, which will have both traditional and art quilt sections in it.  I hinted at it in a previous blog, even showing a concept picture.  The setting for this would be around the 18th or early 19 century.  These are the primary elements I am considering including:

I pulled together a storm at sea in Electric Quilt 7 and gave it some colors.  I have made one of the blocks and it took me a couple of days!!!  Yikes!   It’s not an easy block, but then, I’m not a traditional quilter.   I would probably need about 10 or so of them to make the waves element in the overall quilt. Here’s the EQ7 design I am going to use part of: 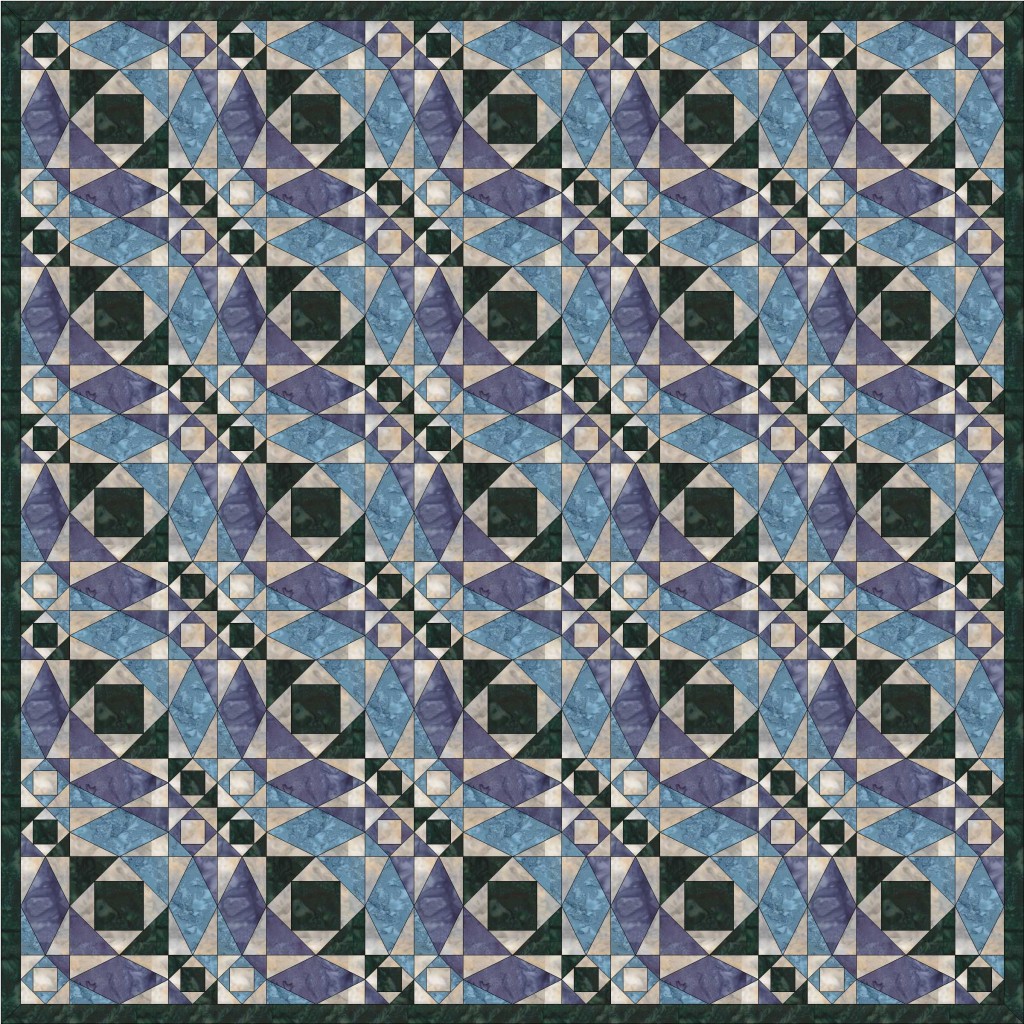 I still have to find the right inspirational picture for the tall ship and the lighthouse.  I think I’ll have to draw the woman from scratch since I have looked high and low for a royalty free picture that matches the one in my head…but at least her back will be to the viewer, so that should help.  I wish I could just take a photo of the quilt in my head and digitize that.

Hope you have all been having a wonderful Thanksgiving weekend.  I think I found the right clipper ship for my storm at sea quilt–it’s again from a Dover coloring book.  I am going to try something I haven’t ever done before and that is converting this into a Bernina applique with embroidery to create in my new jumbo hoop on the Bernina 830. 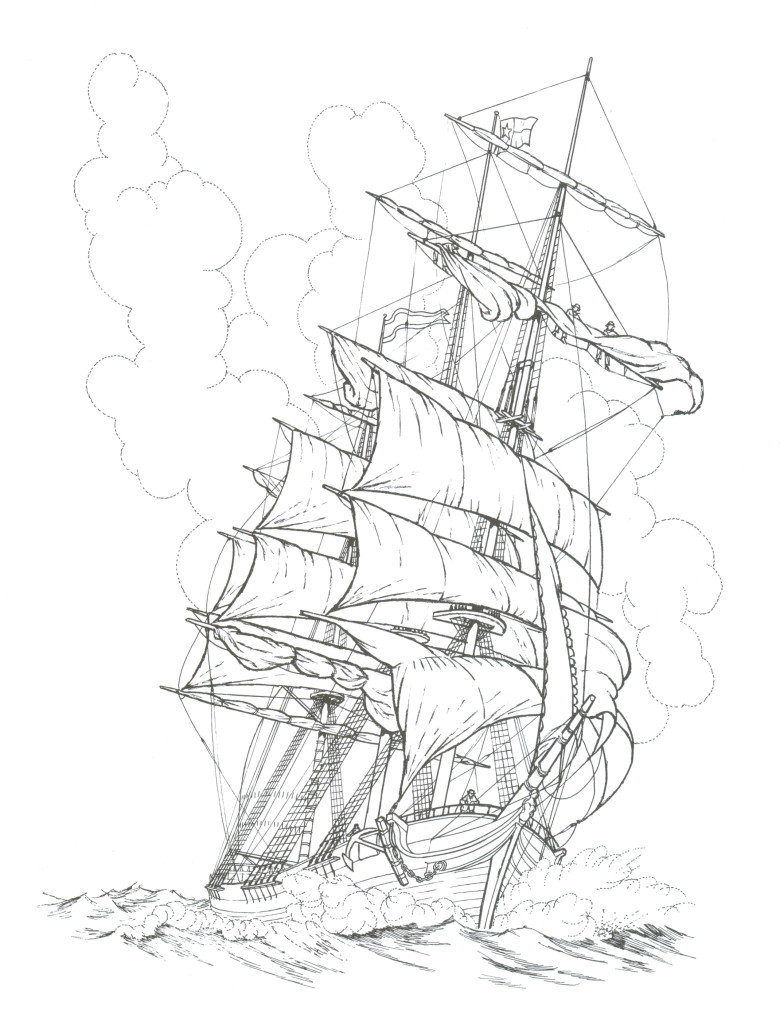 I will have to work through how to do this because it’s a new venture for me.  If any of you who have done this want to give me hints please drop your comments here or send them to me at bjfabricartist@gmail.com.  I believe this will allow me to have the kind of detail on the rigging and sails that I would like to see, and I think the jumbo hoop is about the right size for the ship, but I may need to do two hoopings to get it all done right.  I may also decide to do some of the rigging details when I do the quilting.

Also, I have begun drawing the woman. One of my friends suggests she looks more like she’s wearing a smock than a cloak and that she needs a hood on the cloak.  I think she’s right.  Here is the draft.  I drew this all on my own without an inspirational picture because I couldn’t find anything close to what I wanted.  I gave her a little background so you could see her better.  What do you think? 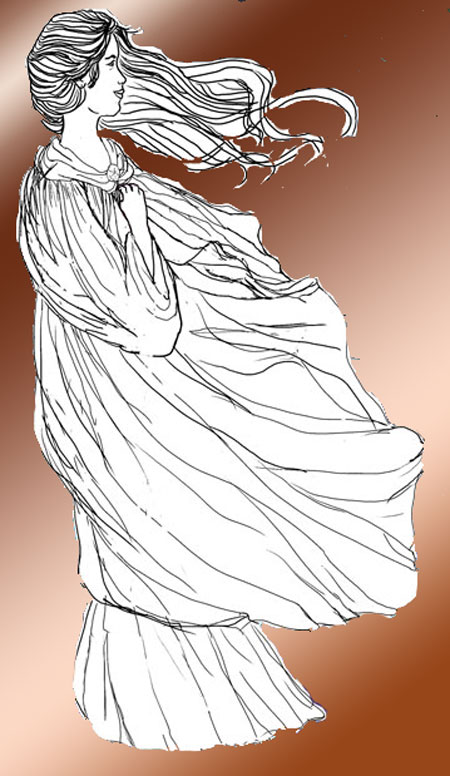 So, you see, one of my methods for developing an art quilt design is to keep working through each problem set in individual segments and then put it all together into a whole design.

This is possible to do with paper and tape and so forth–it’s how I used to work–but the computer helps a lot, easing the resizing and changes for me.  For instance, her hand was too small, and I was able to cut it out and resize it without redrawing it and then put it back in place, fixing the few lines around it.

Once I have the whole design put together I will spend some time perfecting it and fixing little problems and deciding how to make each section in fabric, thread, and maybe a little paint.  I will make notes on my decisions.

After that, I will make a pattern, and print it out.  I usually start with three copies.  I will run a blog once I complete either the fairy garden or the storm at sea design on my pattern-making method using Excel spreadsheet and freezer paper.

Have a wonderful week.

Today I played around with my Bernina 6.0 design software to see if I could turn the clipper ship into a digitized applique with embroidery for details.  I have gotten far enough to determine that it can be done, but I have also found it requires a bit of learning.  In fact, I am kind of excited about the prospect and began dreaming about all I could do with it…digitizing the knight, the Geisha, the mermaid and her shell all as digital appliques plus all the neat new ideas this engenders.But in the end, after about three hours of working to that end on the clipper ship, I made a wrong turn and lost it.  Though discouraging, it wasn’t quite right anyway and I learned a lot in the process.  I then turned to the Webinair they have online at BerninaUSA and went through that plus printed out some instruction sheets they have.  I should have done this in the first place.  Hahahaha…silly me.

I’ll try again with this little bit more how to instruction, but I have to go out to the fabric store tomorrow to pick up some quilting fabrics…some more blues and grays for the Storm at Sea and some dark background fabrics–perhaps dark greens and purples for the fairy garden.  The fairy garden is going to be my Hoffman Challenge quilt for 2012, I think, if I like the design when it’s done.

I’ll get back to capturing the journey toward drawing up the quilt designs in this blog  later this week.  I hope you are working on your designs too.

So here’s my question for you…do you read the directions or watch a how-to video BEFORE you start playing with new software or do you just plunge in like I do?  Most of the time that works, but in this case….I should have prepared better.

Still, I find the idea of digital applique  exciting.  I think I need to work on a simpler sewing/quilting project also just for relaxation.  I could use it to learn to quilt on my new Bernina before I tackle the competition pieces.  Hmmmm…any ideas?

Have a great rest of the week.  I hope you find some time to do some playing with fabrics and threads.

DATE: 12/1/2011 4:18:38 AM
—–
Well, after a lot of hours learning the software and working through things I managed to work out the in-the-hoop applique with embroidery in my Bernina software.  I will say it was a little tough to learn but once I figured it out it wasn’t very difficult.

It really helped a huge amount to have my Wacom digital drawing tablet, but it would be possible to do with just a mouse.  And, it would also be possible to make such an applique and do the embroidery freeform by machine if you don’t have an in-the-hoop option.  Here’s an image of the design.  Note that the fabrics shown are just selected from what they had available.  I will have different fabrics for the boat, perhaps even paint it a little, and more off white for the sails.  But this at least gives an idea of what it might look like. 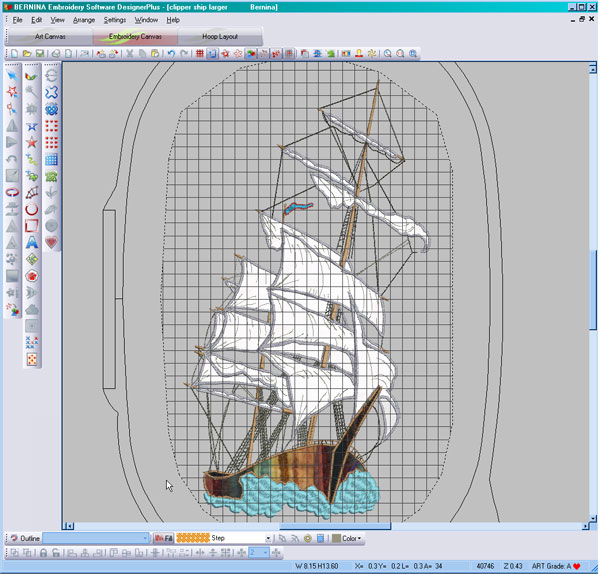