At the end of the day yesterday I was feeling fairly depressed because I thought I had ruined my center block and would have to start all over.  But I decided to try today to fix it.  What happened is that I had added the mote stream behind the knight, and had failed to mostly cut out the fabric under the horse.  I forget how sensitive silk is to things, sometimes.  It is thinner and drapier, and so it showed the edges of the stream right through the horse.  I had steamed it down, so I didn’t think it would come up.

But I was wrong.  Today I found my little Clover ball point awl and a tiny bit of heating the applique with my iron enabled me to slip the awl under the edge without damaging the applique and remove it from the background, as well as separate the horse from the stream.  I recut it, reironed it down and it looks great.  The picture below  shows all the wrinkles and things of the background, but trust me, it is in good shape and all those will disappear with careful ironing and as I work it through. So I am ready now to start the edge stitching, threadwork, and details that go on before adding the border, the word block, the birds and then sandwiching it, which aren’t many.  Most of the details are quilted on.  The horse gets most of his tail and his main.  but beyond that, it is mostly edge stitching.  I am so grateful I managed to fix this!  On to the next challenge! 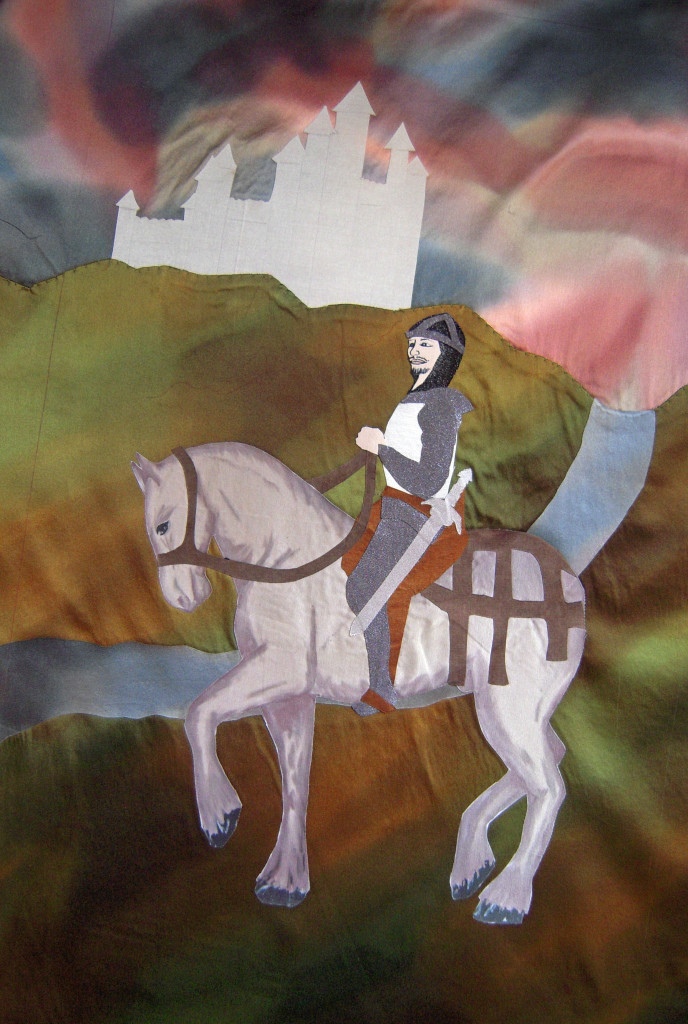 Ready for the edge stitching.

Sew I assembled a bunch of markers to see what I can do about marking the border, which has to be carefully marked, quilted, and then painted.  The border is black cotton/silk Radiance and I am not going to wash this quilt.  I will probably spritz and steam it a little for the blocking, but not enough to remove my favorite marker…the Crayola Washables.  I love those markers, because you can see them, iron over them, and they wash out completely. But you have to wash the quilt to use them.

Anyway, I tested everything from Frixion, Clover White Marking Pen, Fons and Porter mechanical pencil markers, Quilter’s Choice chalk silver and white pencils to White Mark Be Gone.  The Mark Be Gone works on black cotton but not on black Radiance.  You can’t see it.  The Frixion is completely unseeable.  The only ones that you could see are the Quilter’s Choice chalk pencils and the Fons and Porter mechanical markers.  They both rub off fairly quickly.  The Fons and Porter is what I used for Canterbury Silk, and it was very hard to keep on.  I kept having to remark frequently.

The winner, is Quilter’s Choice, both silver and white.  But even they rub off, just not as fast.  The Frixion works great on the other colors*.  And I only need those marks a little for placement of things, so I can do them in such a way that even if the quilt gets frozen in transit and they come back, it won’t be visible.  I do have to mark the light grey castle (yes, it’s grey, not white) for quilting.  I will use the silver chalk pencil for those.

Sew happy everyone!  Don’t get discouraged if you make a mistake.  It can often be fixed, and if not, you CAN remake something, though often there is another solution.

UPDATE:  I also have tested Pismacolor colored pencils, upon the suggestion of Hollis Chatelain.  These are very visible and remove easily with a fabric eraser.  I found they rub off, but not as easily as most markers.

*  If you use Frixion, be sure you place it in such a way that even if it comes back that won’t be a problem.  In my case I am only using it for placements of objects on the central block and it will not show even if it does not go away.  I have been told that quilts that sometimes get in very freezing weather when shipped have been known to arrive with the marks all showing because Frixion returns if frozen.