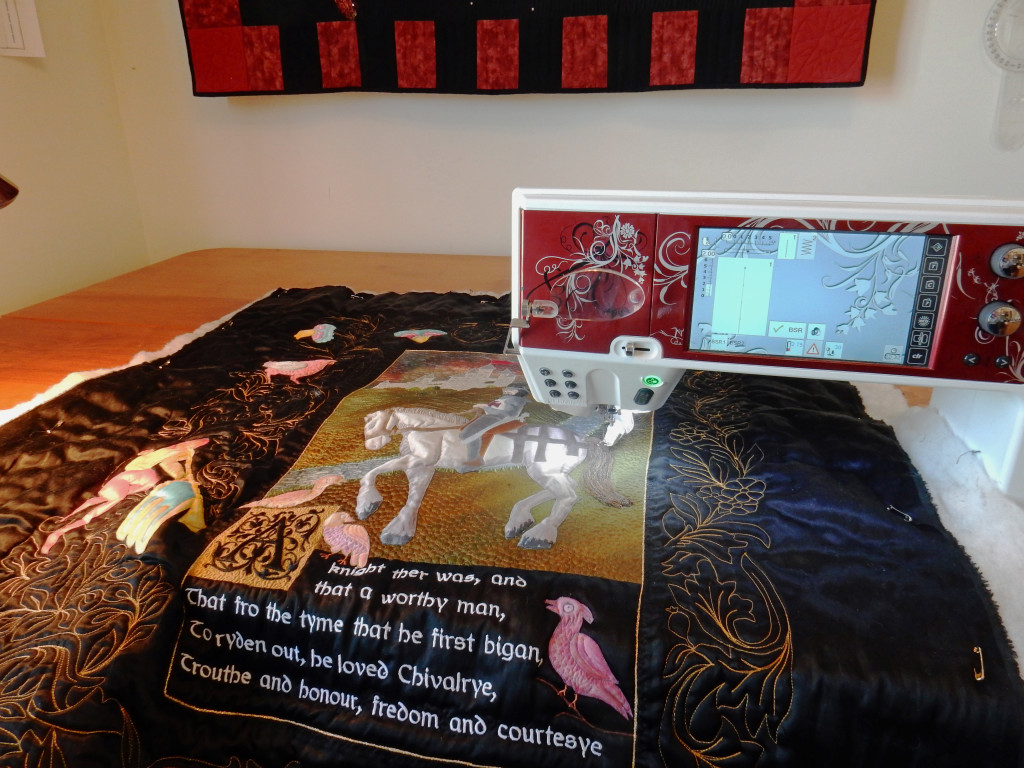 Well, it has been quite a project up until now, but I am finally at the background stippling stage.  Actually, I have finished the stippling in the central theme and am currently stitching around every letter in the text and stippling the black background with a simple smallish serpentine puzzle style of stippling.  I find this seems to be the most effective when I want the background to become the least important part of the quilt.  I don’t know. Judges probably hate it by now.  So many people use that stippling pattern, and I see a lot of quilters have departed from it when I go to shows.  But I still love it.  For one thing, I can do it without too much thinking, so that leaves me able to think of other things, or listen to an audio book.  What am I listening to now, you ask?  Young Adult fiction by Brandon Sanderson…Alcatraz vs. the Evil Librarians and the subsequent books in the series.  They are fun, light, and make me laugh from time to time, especially as the widow of a librarian and mother of a writer (he talks a lot about writers in the books).

Anyway, I got back my quilts (Sky Horse and Canterbury Silk) from Mid Atlantic Quilt Festival where they were part of the show.  They did not ribbon, but I got some interesting comments from the judges.  Would you like to know?  For Sky Horse the judges (Frieda Anderson and Barbara Olson), said “A really ambitious project well done.  Great use of embellishment”; and for Canterbury Silk (Esterita Austin and Anna Hergert), they said “The central motif is exceptionally well executed and supported by the text.  Ensure your borders do not overpower the central theme.”  From Road to California I finally got a complement on my quilting on Canterbury Silk, so that was a first.  From MQX Midwest, that quilt won Best Surface Design, and I believe that was largely on the strength of the borders.  So you never know.  When you get to where your quilts are usually accepted into the major shows, and you don’t get a lot of criticism from the judges, or the comments from one show to another conflict, it is hard to figure what needs to be done to move forward into gaining ribbons.  Ribbons are important to someone like me who is trying to establish a micro business, but they aren’t absolutely essential.

Sew I am about to overpower the central theme with the borders once again on Canterbury Knight.  As you see, I have completed the quilting of the outlines of the border design and they are ready to paint as soon as I complete the miles and miles of stippling.  I am thinking of adding a false sashing to the outside of the painted border by stitching it with decorative stitching.  This quilt is a little smaller than Canterbury Silk and I think it could use that.  What do you think?  It would resemble the inner faux sashing I did on Canterbury Silk between the central theme and its overpowering borders (see below): 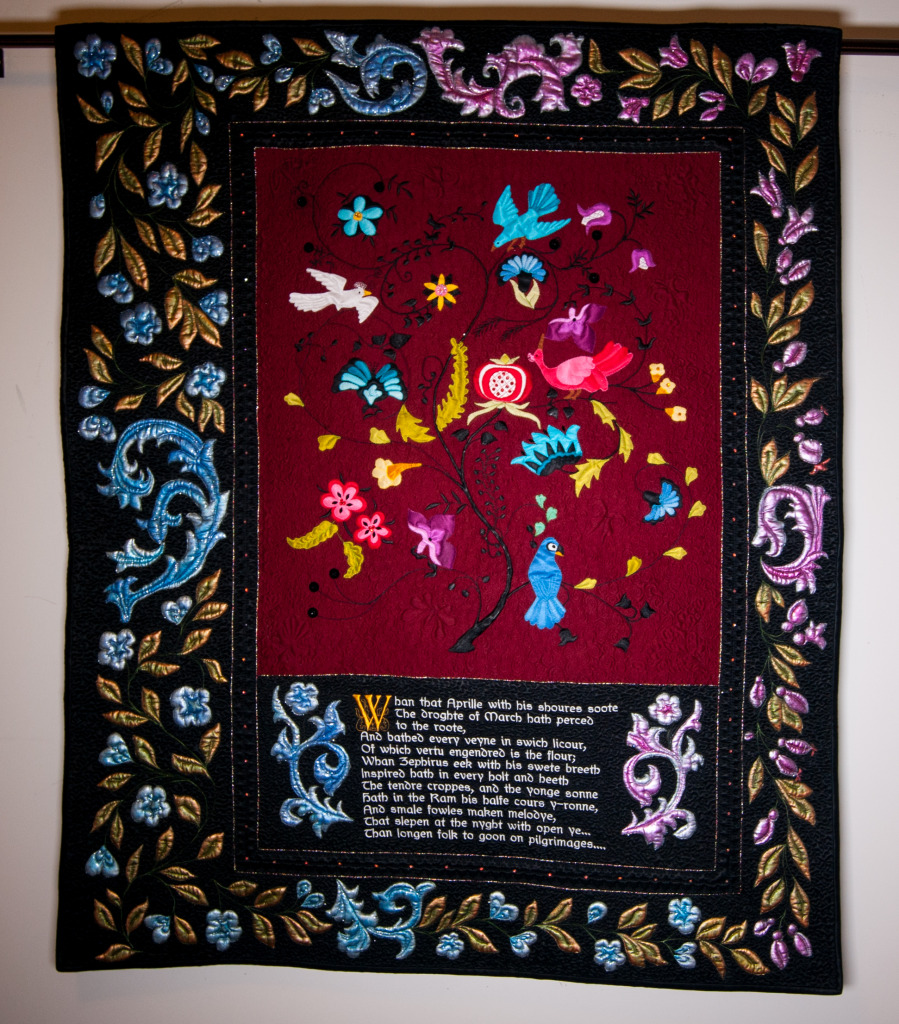 I am not putting a faux sashing on the inside of the borders for Canterbury Knight.  I think it looks better without, since the borders have more stuff in them.  Perhaps the additional black will help lower the power of the outer borders.  😀  Don’t worry.  I’m really not upset.  I am sure the judges were tired, had seen hundreds of gorgeous quilts and it just wasn’t their taste.  Perhaps they really don’t like paint on quilts, which I think is highly probable.  I’m not resentful, and I don’t really think they overpower the central theme.  I’d be interested to know what you think of that.

Sew happy everyone!  Spring is right around the corner, and even already there for some of you lucky souls.  Cheers!