September is National Sewing Month.  I like September for a lot of reasons, and this is just one of them.  It seems like a page-turn in life, almost like a new year and I love to watch the leaves turning from green to purple, orange, red and yellow that starts in September.  I like to turn the page and start afresh in my studio too.

I have four quilts out for shows right now, and I will learn whether any of them placed in mid-September.  I always hope I will get a ribbon, but I think the chances for any of these placing is quite slim, considering all the fabulous quilts in these shows.  Two of these shows are in mid-September:  Pennsylvania National Quilt Extravaganza in Philadelphia, which has Sky Horse and Kanazawa Memories and AQS Quilt Week in Chattanooga, which has Canterbury Silk.  International Quilt Festival in Houston, which has Canterbury Knight doesn’t happen until the end of November, but they say they inform the winners that they have won something around mid September.   So if I don’t get any ribbons, which I am always disappointed over even though I tell myself not to be, I can get over that all in the same part of the month and move on. 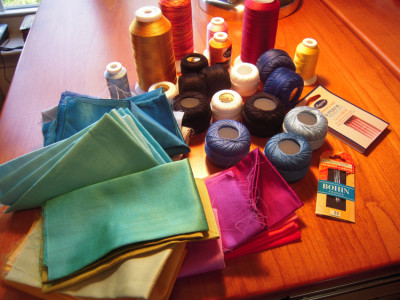 Speaking of moving on, this September is bringing the beginning of several fun projects.  I am starting the second in my women keeping the home fires burning while their men were away for work or war throughout history series (I’ve GOT to get a shorter title for this series, and perhaps I need to end it with a modern day man keeping the home fires burning for their woman, but that is a ways away if I even do it). I began this series with “Waiting…”, and then decided it would make a wonderful series.  I have gotten all the fabrics together and a sky painted.  I’m not sure about that sky…I may paint another one. I can’t tell until I have more of the other parts of the quilt made and can put them kind of together.  It’s really kind of a rework of this quilt, but actually is going to be considerably different: 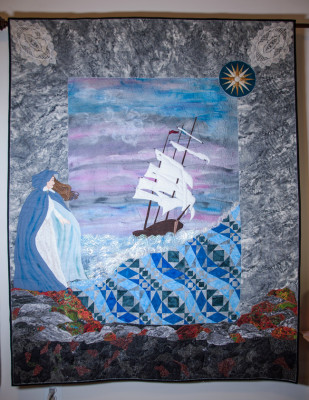 I’m also designing a quilt for Hoffman Challenge 2016 but the fabric isn’t yet available.  They have posted what they will be here.  I like the fabrics this year.  I wasn’t inspired by the choices for the past few years.  So I decided to make a 2016 quilt.

I like to work on two quilts in different phases at once so I can switch between them when I feel like throwing them out of the window.  This is an inevitable phase of making show quilts…I always have at least some point of time I need to leave it alone and work on something else just so I don’t take my scissors to it.  So since I can’t get started on the Hoffman Challenge quilt until the fabrics are available, I am also working on a couple of other quilt designs I have rumbling around in my head right now.  I’ll tell you about them later.

Additionally, this month I’m picking back up my work on two books I’m writing.  One of these is about 80 percent complete, and the other is outlined and I have the first chapter written.  Both require samples and pictures…so I am working on those also.

And finally, I am working on developing a couple of classes to teach locally.  I’ll let you know what those are and how they go when I get them further along.  I’m thinking machine applique for one, and domestic machine quilting for another, but they are very much in the early stages of just thinking about them at this point.  I have the location already worked out.

So happy National Sewing month everyone!  Learn a new technique, practice an old one, or teach someone to sew…your kid, your brother, your cat.  So happy everyone!