For fun and profit I decided to take the MQX show challenge and make a quilt using an Alfred Shaheen vintage panel as the basis of the quilt.  There are just a few rules…one needs to use the whole panel (after it is squared up), and it can’t be more than 200 inches perimeter after all the additions of borders are made.  I found one for just $12.  It came in wonderful condition and looks wonderful.  Here’s a peak at a portion of a similar panel.  Mine has slightly different greens and blues. I’ll show you pictures of the quilt later. 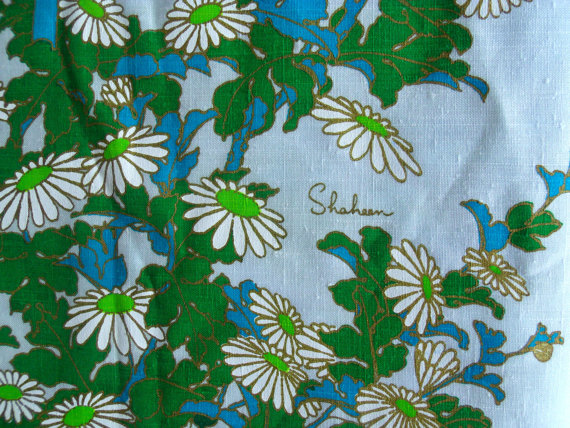 Then I ordered three solid colors by matching the colors directly on the screen with the painted colors on the fabric.  They came and are a really close matches to the colors in the pattern.  So I put on two borders…one 2 inches wide and one 5 inches wide with cornerstone blocks from the third color.  I was not planning on spending a lot of time on it, because it is not really a show quilt, except for the MQX special exhibit.  But I do plan on selling it if I can.  So it has to be really good…just as good as a show quilt.  😀

I’ve really enjoyed making this quilt, although it is taking me longer than I wanted.  It’s been fun the whole way.  The only time I got frustrated was when I was having trouble squaring up the panel, but friends of mine reminded me to use my laser square and blue painter’s tape and it helped a lot. The panel is linen with a fairly loose weave and has a tendency to stretch, so the blue painter’s tape helped to keep it from stretching out of shape and I taped it along the laser light, giving it a nice edge to follow when I cut it.  It’s nice and square and the borders and cornerstones went on nicely.  and now I’m quilting, quilting, quilting….

In other news, I’m removing the foundation paper from my Storm At Sea portion of my second in my “Waiting…” series.  My oldest son suggested the pieced portion of the sea and the non-pieced portion might ought to be closer in tones and less busy.  So I decided to over-dye both pieces together, because I agree with him.  The foundation paper I use is Electric Quilt printable, which can stay in the quilt if you want, or can be removed if you want.  It is a little fibrous and slightly more difficult to remove than paper paper, although I really find it wonderful for accuracy.  I spent hours on that piece, and it is a risk that I may end up having to do it again, but it also could be just what the quilt needs.  So I’m going to risk it, It’s an adventure.  😀

Also, I’m working hard on my first book.  I need to start making the samples for that.

In my last post, I asked if you would be interested in a block-of-the-month type of project.  I decided to do one.  It won’t be blocks of course, and so I’m calling it an Art Quilt Techniques Step by Step quilt.  It will be a Japanese Ikebana quilt with a vase in front of a moon in front of a background, and I will provide the flowers for download and printing on your printer. I will include Ikebana concepts for you to arrange the flower appliques in your own arrangement and there will be a selection of vases.

I probably won’t get this started until March after I get back from Mid Atlantic Quilt Festival, but I’m already working on the design, and I expect it to be about six techniques/steps, so we should be finished around September or October.  I think it will be fun.  I hope you will be generous with your feedback on these steps.

Anyone got an idea for a short name for this kind of quilt challenge?

Sew happy everyone!  In this new year let us love, learn, share, sew, and quilt.  Hugs to you all.

2 thoughts on “A Hawaiian Garden Quilt and Other News”