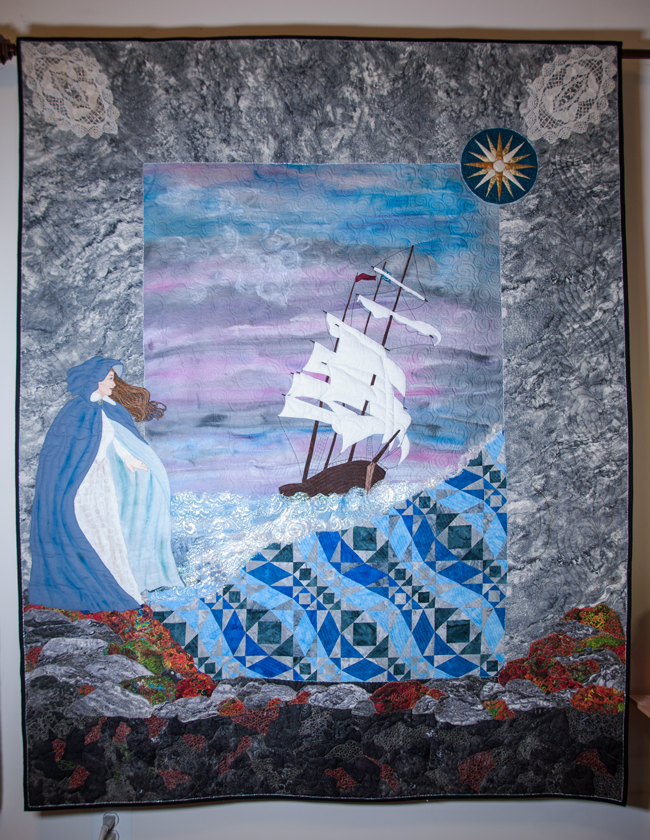 I just sold Waiting… yesterday.  It has been hanging in G Street Fabrics Bernina section for about a month now, along with a couple of my other quilts I have decided to sell. I love this quilt.  It took me over a year to make (off and on…probably about six months full time).  I sent it through several national shows, and used it a bit for my show and tell trunk shows, but the judges thought the borders were too wide and so forth.  I actually agree with them now, but I will tell you that feedback to me personally from people who have seen it was the most positive of any quilt I have made before or since.  Several people–even men–have actually wept over the quilt, as did the buyer.

The one-on-one responses have been so strong that I decided to make a whole series of quilts based on the heart-tugging circumstance of women (and some children) waiting at home for their men to return from war or other dangerous and totally necessary jobs down through history.  The women faced difficult and sometimes dangerous lives while their husbands were gone, and many kept the home going, raised their children, and fed their families while their husbands went and came back from their important jobs. Or they did not come back!  Currently, I am working on the second in the series.  This will be very similar to the one above, except the borders are different, or non -existent, and the woman is a little better dressed and has her daughter with her.  The ship is going to be better also, I hope, and there will be a distant light house.  I have been working hard to get the sky and sea fabrics right, and I think I have finally done that, so I am constructing the top and trying to come up with a name.

It is hard for me to sell my quilts.  I put a lot of myself into them.  But it is also an honor when someone loves one so much that they buy it.  I am so happy it is going to a couple who love it and told me personally they are planning to cherish it and pass it down to their family.  I need the money, I need the space in my home for more quilts, and I need to sell more quilts for these reasons.

Day before yesterday I took down my online shop where I had my quilts for sale because it was getting no response and I had originally been told that they were going to have downloadable product capabilities by the end of last year. They have changed that apparently.  So yesterday while I was investigating different ways to sell my quilts and downloadables I got the call from G Street.  I’ll leave the other two quilts at G Street for a little longer and then maybe make some changes.  They are beautiful, but don’t have the same emotional tug, so we’ll see what happens.  They are: 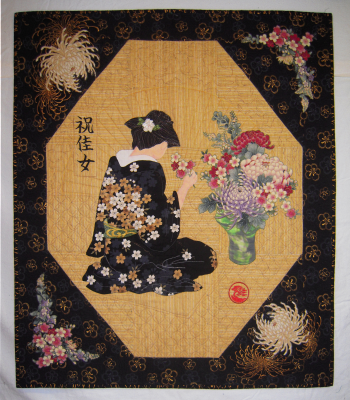 Quiet Celebration, Second Place winner in Hoffman Challenge 2011 in its category and also shown in Ireland, and 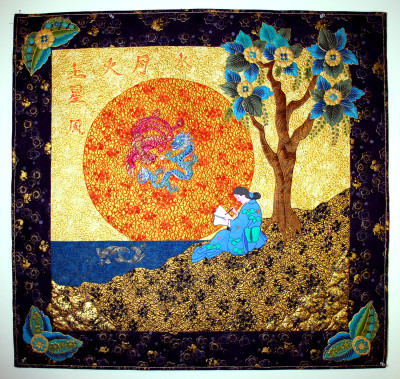 Sew happy, everyone!  Go make yourself some art for your walls.  By the way, I haven’t forgotten the idea of a quilt work-along that I advanced some weeks back.  I’m working on the pattern now.  Also, I am working on samples for my first book.

4 thoughts on “The Waiting… Series of Quilts and Other News”