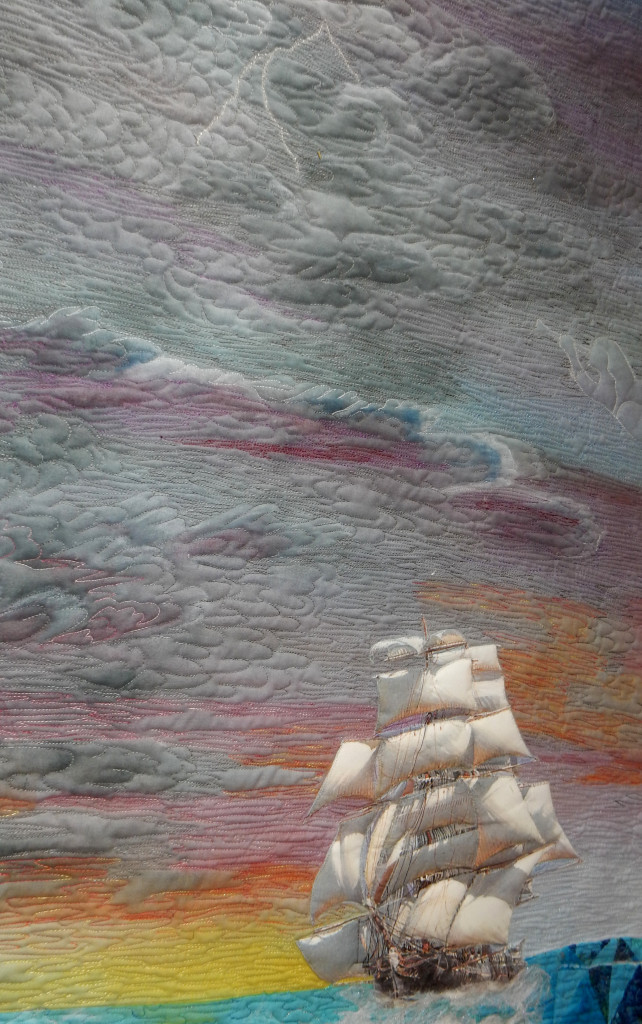 Some of the sky colors after quilting.

I finally finished quilting “Waiting…2”, and I blocked it, though I still need to do a little thread clipping and binding.

During the quilting of the sky, which has been the most difficult part of this whole quilt, the thread colors became very important. The overall magic of the sky grew substantially different in coloring before and after the quilting, but to my chagrin I did not take a before picture.  I did not understand how much difference it would make other than just a good quilting.  I fell into a pattern of sculpting clouds and using thread colors to bring the sky to life.  I already had added some painted colors to the sky, which I used for my guide to thread colors as I worked.  The different thread colors really helped me realize the vision I had in my head for this sky, almost a thread painting.  In the end, I surprised myself when I realized I had used over 30 thread colors of thread, including metallic silver and monopoly, for this quilt!!!  I was as surprised that I had this many good threads in all these colors as that I had used that many on the quilting.  What a happy thing that I have collected these over the past four or five years and kept them carefully, replacing colors as I used them up and adding a color set here and there.

Most of the threads I used on the quilt are Superior Threads…Rainbow, King Tut,  and Magnifico solids, with Bottom Line for the bobbin.  I also have a couple of Isacord solids in there somewhere.  I used gray bobbin thread (except for the monopoly) which goes well with the back, and I made sure the tension was as right as I could get it and I can’t see any gray on the top or any colors on the back where they should not be.  This enabled me to easily change the color frequently.  I did have a couple of incidents where I needed to take out some stitching because I forgot to change settings for the different types of threads.  This is where a little notebook really comes in handy.  I make notes about each type of thread (not each color).

I took almost all day yesterday to get the quilt blocked and marked square (I haven’t yet cut it square, because I put the binding on using the marking before I do that).  I got it all squared up according to my laser square and various other square ruler aids.  Then I measured all the sides and it was 5/8″ longer on one side than the other and equally wide across top to bottom.  Arghh!!!  I ended up erasing all the marks and starting over (twice) until I got it right. It’s a mystery…LOL.  Judges really don’t like it if it isn’t square and neither do I.  I can only think that the considerable bit of trapunto I placed under the cliffs had an effect on the square “measurers”.  It seems the original marks were a little bit off on both the top line and the bottom line.  Anyway, it’s marked square now, lined up to the water horizon line, and I even took out a different color marker to make the final marks clear.  Hooray!  ready to bind.

Sew Happy Everyone!  Have a wonderful weekend and rest of the week. Try a little quilting with color varieties and see what you think.