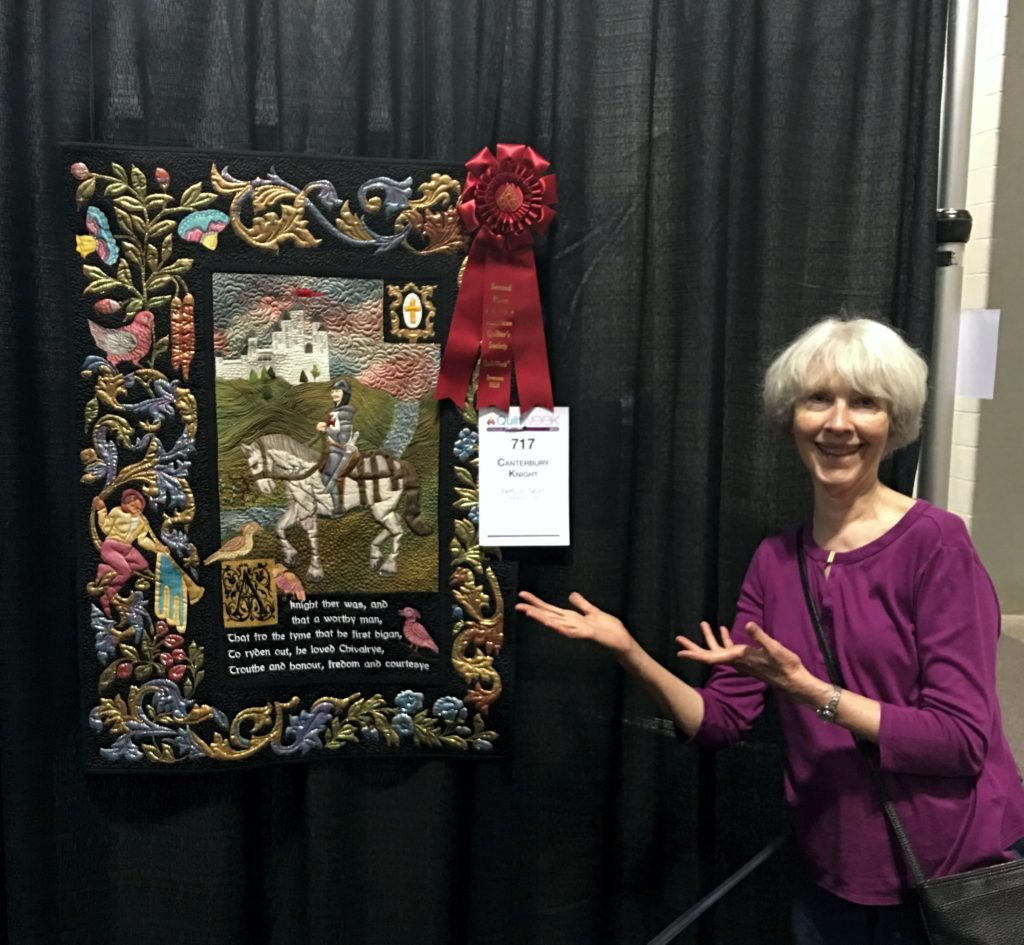 Canterbury Knight in AQS Syracuse with Ribbon and my friend Libby

This has been a rather emotional week.  First of all, as many of you already know, my little quilt Canterbury Knight won a second place ribbon in its category at AQS Syracuse.  On Friday, a very long time friend of mine Libby Hedrick in Ithaca, NY, pictured above with my quilt sporting its ribbon, went to the show and took bunches of pictures of the show and my quilt in place. She and her husband are musicians and we used to sew together and went to the same church and even performed music together when I lived in Ithaca, NY as a young wife and mother so long ago.  We have been friends all these decades despite not seeing each other very often after Marvin and me and the kids left Ithaca for Washington, DC.  What a sweet delight for me filled with memories and fun.

In fact, so many of my friends have been encouraging me, inspiring me, and helping me move my quilting art forward, and it seems to have been especially so this week.  I am excited about the future.  Yes, the future…I moved into quilting when I was in my late fifties from a clothes sewer and even fashion designer and I am 69.  One of my role models is “Grandma Moses” of the art quilting world, though my style of art is different.  I did get a running start on her…she started serious painting when she was 78!

From Wikipedia:  “Anna Mary Robertson Moses (September 7, 1860 – December 13, 1961), known by her nickname Grandma Moses, was a renowned American folk artist. Having begun painting in earnest at the age of 78, she is often cited as an example of an individual successfully beginning a career in the arts at an advanced age. Her works have been shown and sold in the United States and abroad and have been marketed on greeting cards and other merchandise. Moses’ paintings are among the collections of many museums. The Sugaring Off was sold for US$1.2 million in 2006.”

Sew now we’ve established that I am planning on a lot more quilting and that my Spiral Galaxy quilt is finished, I have been working on digitizing elements for my oldest son Ken’s quilt design he gave me for inclusion in my Ancient Manuscripts series in my Bernina V7 software.  It is a fabulous design, related to the knights of the round table.  The Celtic design border is the most problematic to make.   I’ve pretty much figured everything else out, except how to make swords look sharp and pointed in fabric.

Sew even though I am not going to share with you the entire design until later..maybe even after its debut…I will share parts of it here and there.  Right now I am working on border elements.  Here’s the upper left corner design.  I think he brought it in from a Dover publication and the original artist likely drew it in the 11th or 12th century.  So it needs a little cleaning up.  Here’s the design: 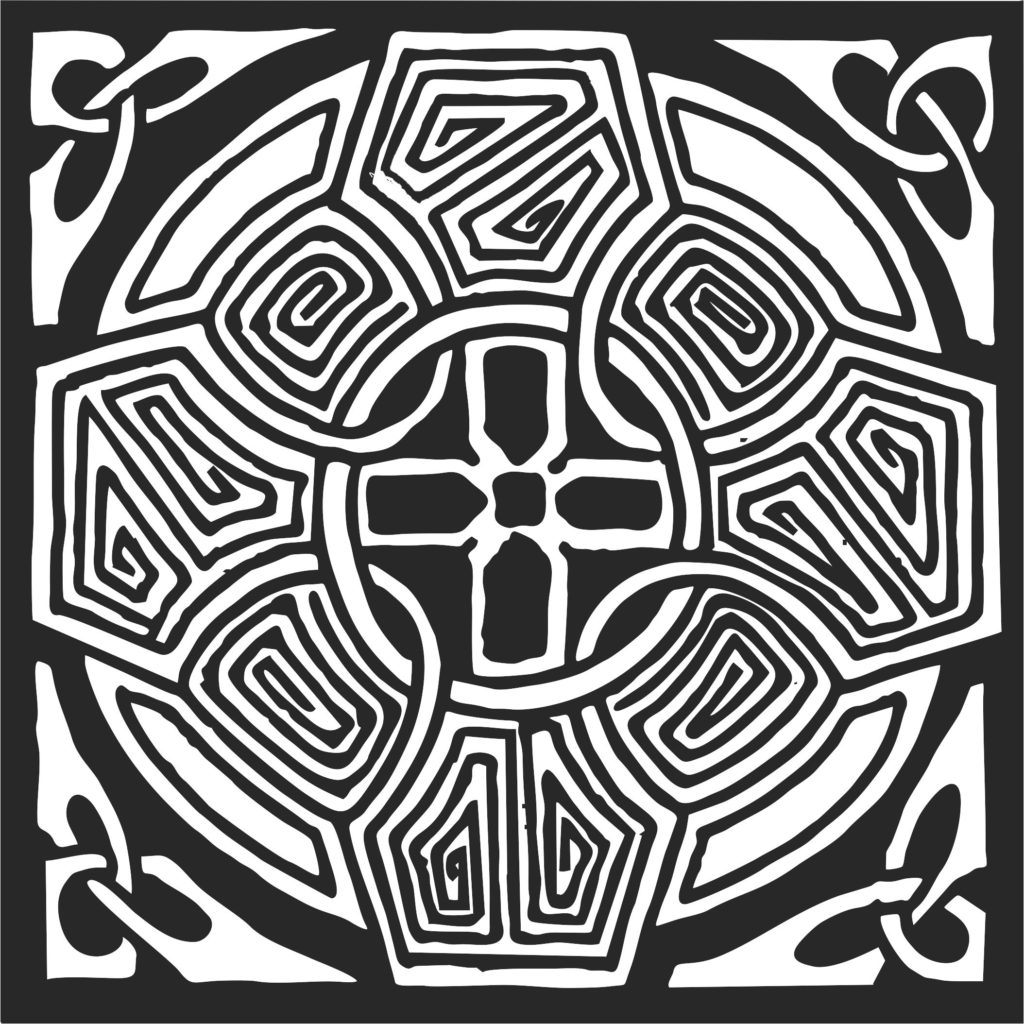 I’ve already digitized a few designs and am about to go and do a stitchout. Here’s the image of the lower left corner (7″ block) 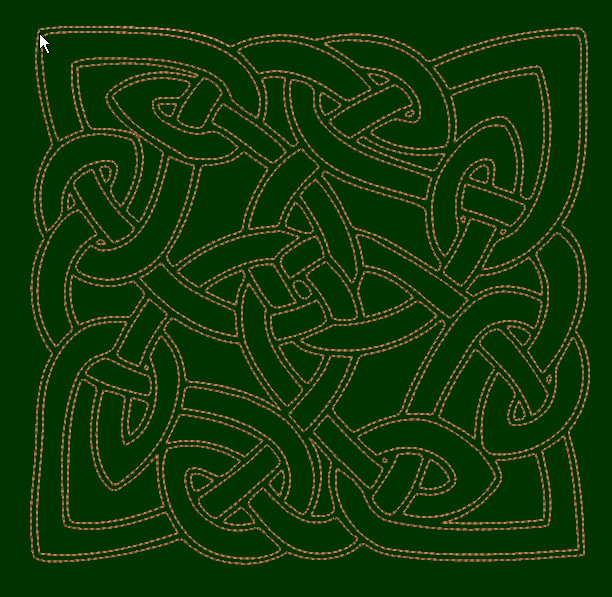 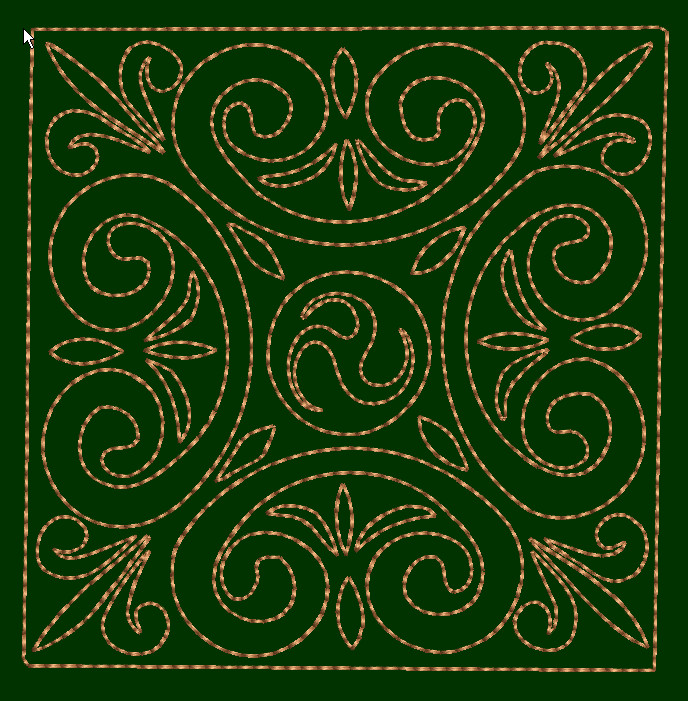 The bears in the border are the long designs that run the length of the borders between the blocks.  I’ll let you know how I solve this. I may end up painting some of the designs after stitching with gold paint.  I just have to work these things out one item at a time for this wonderful design and, like I suggested in a recent post, it is important to test these things along the way.

Sew happy everyone!  Thank you for your wonderful support and encouragement.  It means a lot.

4 thoughts on “A Ribbon, Good Friends, and Starting a Special Quilt”