I have decided to do a multi-part (not sure how many parts) series on quilting on domestic machines for artists.  I know there are a lot of you out there who really don’t consider yourselves artists, but who really are.  You pick colors, you make shapes, you put them together to make a pleasing wall quilt, snuggle quilt, bag, vest or some such, and come up with something wonderful and then you have to quilt it on your sit down domestic machine or sit down longarm.  So, that is who I mean when I say “domestic machine artists.”

There are many considerations, tools, threads, and designs to help, but just how to put them together becomes almost overwhelming sometimes.  I know this because I’ve been there.  Indeed, almost every quilt I make is like that.  And I have many quilts in my head that I want to make that may be even more of a puzzle when it comes to the quilting.  This little series may not be real organized, but I want to share what I have learned and you can take it away and improve on it, or reject it, or whatever you wish to do with it.  LOL

A little over a year ago I started experimenting with domestic ruler work, and since then have watched it take off.  I began with a Westalee Ruler foot on my Bernina 830, and later got the #96 foot, which no dealer recommends because you have to ALWAYS remember not to start it with the foot up.  It has to be down or you could knock your machine out of timing.  They are supposed to come out with their #72 foot that will be the recommended foot for use with your regular Berninas by the end of the year.

I have since solved the problem of using my #96 foot the expensive way by purchasing a Bernina Q20 longarm and set it up as a sit down in my studio.  It uses all my free motion feet I got for my 830 and is wonderful, by the way, but the essentials of using rulers are about the same.  The chief difference I found is that the rulers have to be on the small side, and the field of vision is not as large on the smaller harp domestic.  Also, the stitch regulators are doubled and built in and are much more powerful in the Q20 and so you can quilt a lot faster than on a Bernina with the BSR attachment.  Nevertheless, most of what I have to say is the same for sit down machines of all sorts.

I have found to my surprise that I have a bunch of quilting rulers.  I don’t know HOW that happened.  LOL   I would like more.  Anyway, I really really like Lisa Calle’s rulers.  They seem just right for my kind of ruler work–well marked, easy to handle.  I also have one ruler from Gina Perkes, and one Westalee.  I am going to borrow my daughter-in-law’s collection of mostly Gadget Girl rulers and review those sometime later–perhaps I’ll be able to pick those up next weekend.  Anyway, here are the rulers I have found most effective for art quilting at my sitdown machines so far:

Well, in fact the very first quilt I made at Fritz (my Bernina Q20) was my Spiral Galaxy Number 3, and it won a ribbon at PA National Quilt Extravaganza (PNQE) in September for Best Interpretation of Theme.  I used those longer curved rulers at the back of the picture above and the little ones on the right for making the initial stitching of the arms of the spiral.  You can’t probably see it in the picture, it’s black 100 weight silk thread, but it guided the rest of the quilt.  The smaller curves were needed in the center of the spiral, changing four or five times to a larger curve progressing to the longest curve by the end of each arm. 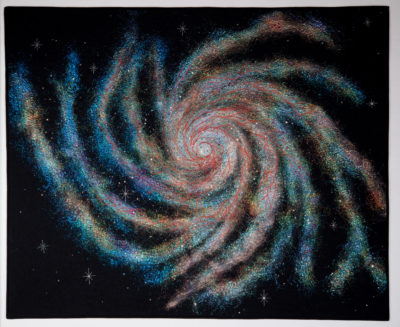 So recently I have been working on the quilt my oldest son Ken designed for me that has Celtic borders.  The ruler work is not for the quilting yet, but rather to make the border pieces.  I will quilt along the same lines with invisible thread once they are pieced into the top and sandwiched.  So here is the design marked on the paper and stuck onto the satin ready to stitch: 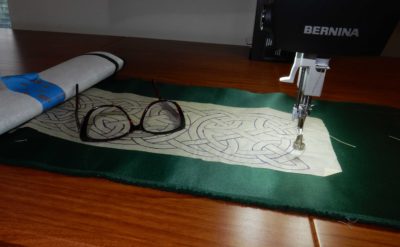 And here is the final piece with the rulers in front that I used for all those varied twists, turns, and I also used a straight ruler which I forgot to put into the picture.  Because the design was a reproduction of an eleventh century artist’s illuminated manuscript border all the turns and angles were slightly different from the one before it.  So I had to keep fitting the rulers into the design and stitching a little ways and changing to another ruler.  The entire design was stitched with rulers, the paper removed (yes, that was a project), and painted.  I am hoping the quilting will make it clearer where the design crosses over and under itself. 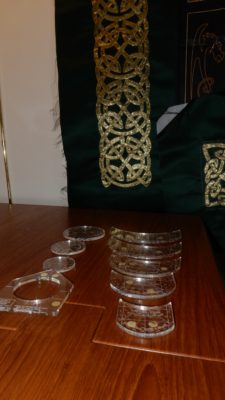 And just to bring this together, below is one of my early practice pieces in which I used a lot of the small rulers for small circular or half circle designs.  When you look at this, remember it was done on the very first day of stitching on my Q20 and I missed a lot.  In fact, it’s not very good: 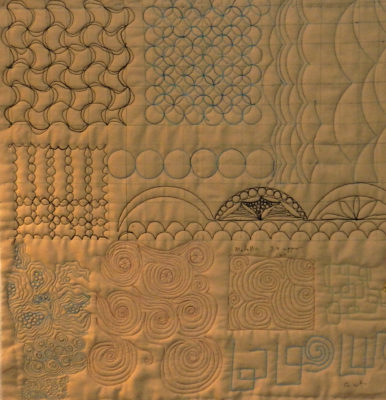 some of this is ruler work

I have set up a couple of practice sandwiches to play around with the rulers and will be showing some of my results of that in a later part of this series, along with a discussion of threads, needles, markers, and free motion embroidery.  The plan is to also show some fill work.  I am doing all of this partly for my blog readers, but also in preparation for a workshop I will be doing at G Street Fabrics in Rockville in June 2017.

I will tell you that sometimes I get better results for some of my straight stitching using my Bernina 830 than I do on my Q20.  This is not always the case, but it is something that you may want to keep in the back of your mind if you are getting frustrated on a project where straight line work is important.  You can use any of your machines…you don’t have to be stuck to just one if you have several.  Use the one that gets the best result.  Here is an example: 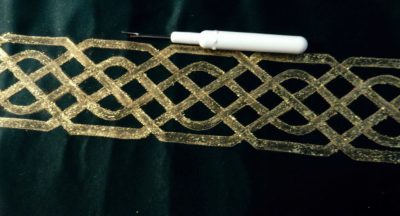 stitched on my 830 with golden threads paper and the straight stitch with #37D foot.

I found this just simply went better with just plain markings and a straight stitch…slow but sure…using golden threads paper stuck on.  Then, like the bigger border swirly design, I removed the paper (even more of a task) and painted it. I have two more pieces before I’m finished.

Sometimes, I also use a ruler to help me get things straight when quilting on my Bernina 830.  I did this long before I had Fritz, and would probably use a straight ruler at Fritz for this if I were to do such a project again.  In the end, I actually cut this all off and bound it closer to the central design, but it works pretty well for some applications. 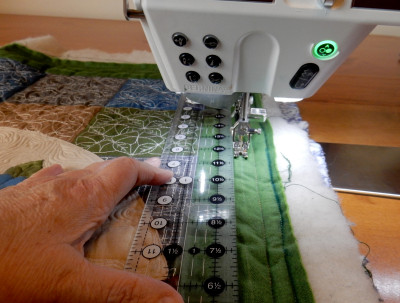 Sew happy everyone!  Let me know if you have some rulers that you particularly like. Send me pictures of your ruler work, along with the information about the ruler you used, and I’ll probably publish them in future blogs.  Send to BettyJo@bjfabricartist.com