Yesterday (Saturday, 10 June), I led a workshop on basic machine quilting at G Street Fabrics in Rockville, Maryland.  This workshop was held in the Bernina Department where part one of my quilt exhibition is being displayed.

When I walked into the area I was overwhelmed.  There were 17 students (with several students at each machine) of varying ages and my quilts all around the walls.  It was the first time I had seen this part of my exhibit.  (The second part begins in mid July and it all runs through August.)

This workshop was much more intense and went much faster than even I had anticipated, and I had thought that there was definitely not enough time to cover what I wanted to.  I managed to get a short introductory lecture, show my samplers, and provide initial instructions done and they had a handout also to follow.  We were off and running.  Here I am (or some large older woman..LOL) demoing on G Street’s new Bernina Q20 sitdown floor model.  I was describing what I was doing. 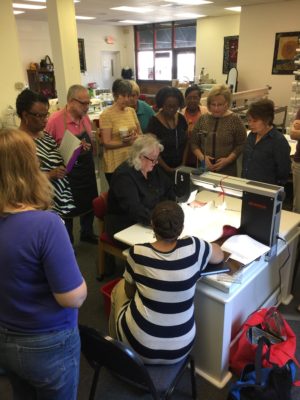 I was swamped with questions.  Many of them had nothing to do with the workshop but were centered on my quilts showing all around the walls, but many of them were related to the task at hand.  We went an hour long, and I think that it could easily have gone even further.  I walked around to see what each student was doing, and found that most of them had done very well, and several of them had obviously done this before.  Even after the class was broken up, I had several people asking questions.  I liked that, though, but I was really tired.

I managed to squeeze in a little couple of those tiny cheeses and a banana snack, but I think I ate someone else’s banana that was near me, because I found the one I took in my bag when I got home (with apologies).  It is possible I brought two bananas, but I don’t think so.  ??

Sew what did I learn for next time (I’m doing this again in the fall)?

4 thoughts on “Notes on My Machine Quilting Workshop at G St. Fabrics”