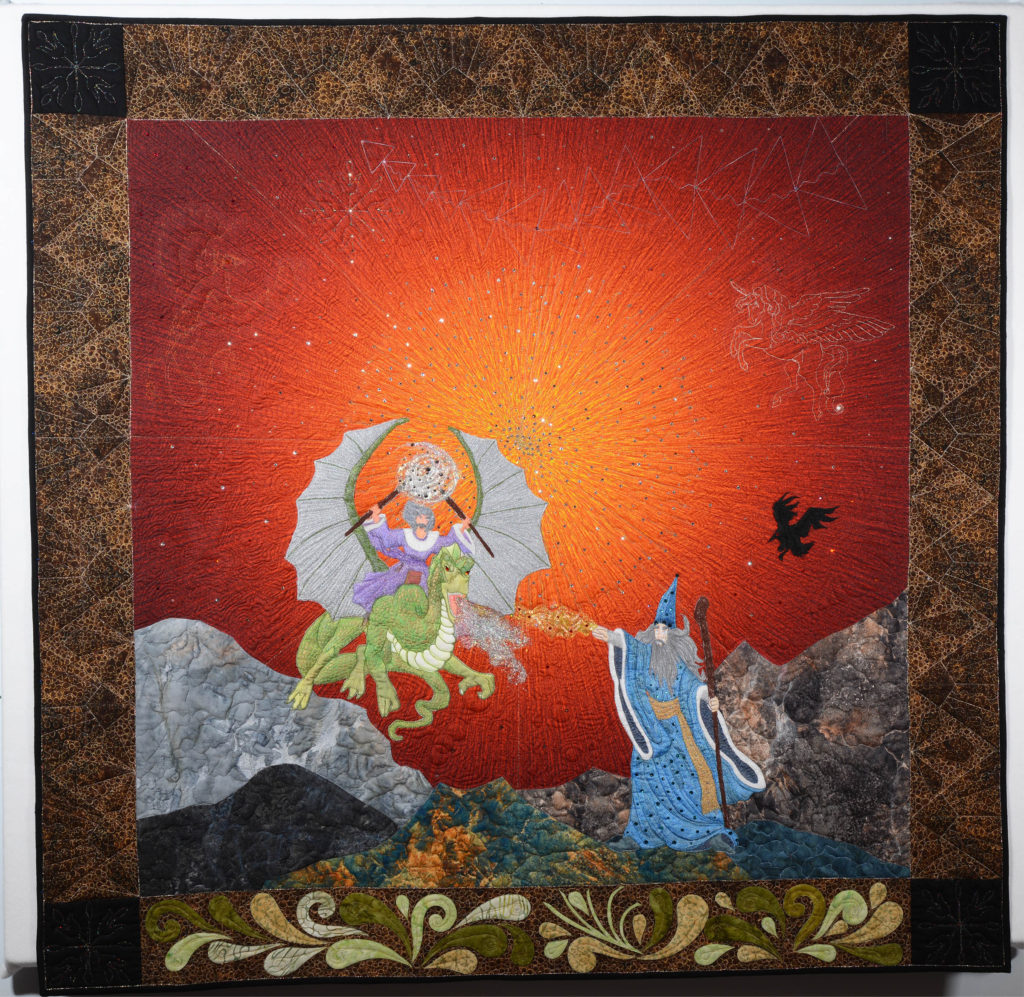 I promised you all that I would write about this quilt after Mid Atlantic Quilt Festival.  I had a wonderful time going to the show with one of my best friends Mei-Ling Huang.  Mei-Ling is a lot of fun and we share many interests.  She claims not to be a quilter, but I have seen her quilting on the Bernina Q24 longarm set up in her Bernina shop at G Street Fabrics where she is the Bernina dealer.  But she is a long-term sewist and she does make beautiful garments.  Currently, I happen to know that she is working on a t-shirt quilt for her daughter, who is in medical school.  She was clearly fascinated by the goings on at MAQF and we enjoyed very much the class we took together from Sue Nickels on Stitched Raw Edge Applique.  I found the class a perfect example of how to organize and run a class as well as really enjoying the applique instruction,

Sew the picture above is my completed quilt and I got the judges comments back yesterday.  They have marking grades on standard criteria.  It fared very well, getting all top marks (E for Excellent) except for degree of difficulty and that was S for Satisfactory.

I don’t know which judge had which comments section, though I do know that they weren’t Pepper (a friend of mine), who just signed it.  After looking at it objectively, I happen to agree with the comment about the rocks and plan on adding some additional quilting and maybe a litle more highlighting before I send it out again.  Not sure I agree on degree of difficulty, but seeing some of the other quilts there I am pretty pleased with these marks overall, which is rare when I get my judges comments back.  I am a little puzzled about the batting a bit too puffy comment, but to each his own.  Maybe it had to do with the rocks.

When I am done with a quilt I like to look back at the original concept and see how far away I wandered in the making of the quilt.  Here is the finished concept art, though I did go through a number of other versions along the way. 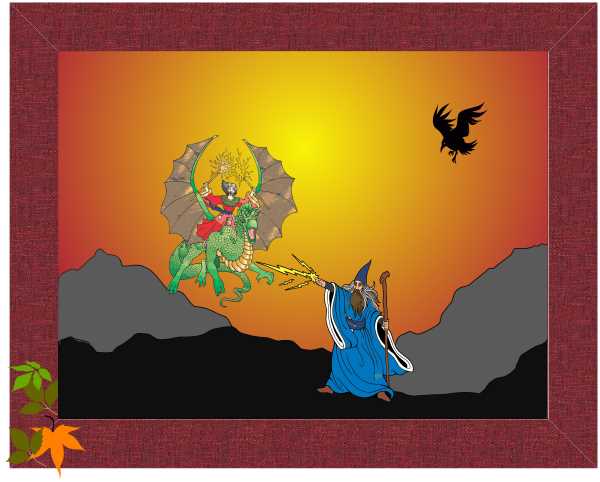 And here are some detail photos of the quilt.  I hope you can see all of the quilting.  I had loads of fun with that turbulent sky full of characters,  I have a Pegasus in this shot.  Go up and look at the full quilt and see if you can find the Phoenix, the small flying bird, a starry kind of symbol like I used in the corners, and the little bit of free motion feather design at the corner near the raven.  I also free motioned and straight ruler stitched the explosion of light (is that a sun?  I think so) behind the wizards. 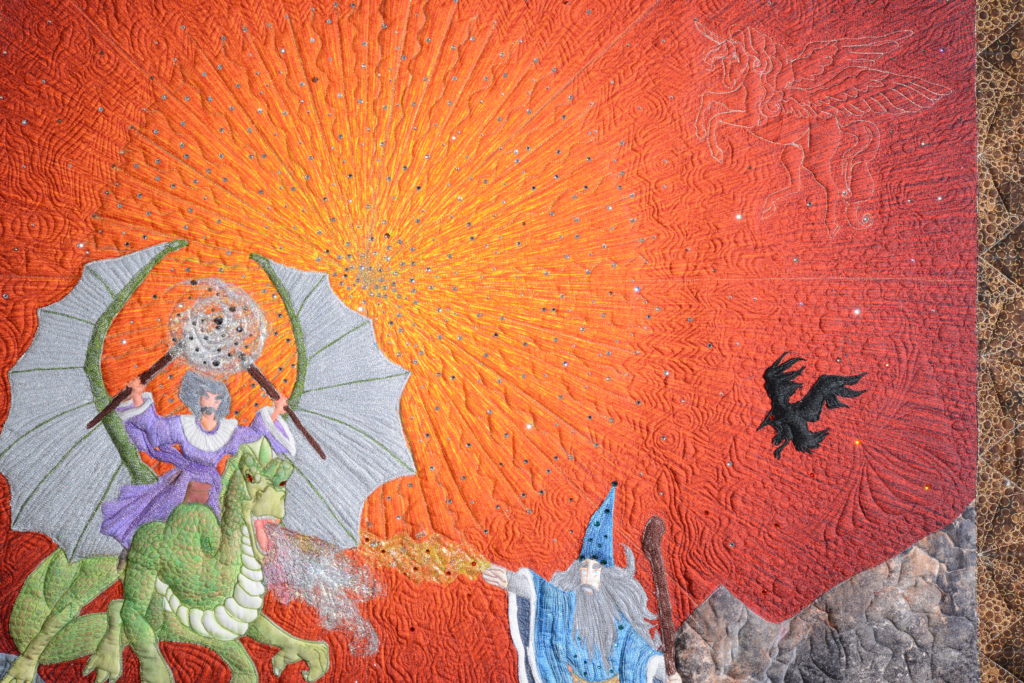 And here is detail shot two…on this you may think you see a row of flying geese, but that’s not what they are.  In my mind’s eye these are a row of flying pterodactyls!  Hahaha.  I hopeyou can see these, I know it’s kind of hard to see.  Also pay attention to the border.  This quilt is the first one where I used ruler work extensively. I used a strip of paper that was the exact length of the border and folded it until I got the divisions perfect (no math method) and marked the grid on the border, then used my rulers to quilt the design without additional design marking.  Then I just bubble stitched where it needed filling.  I was pleased with the results. 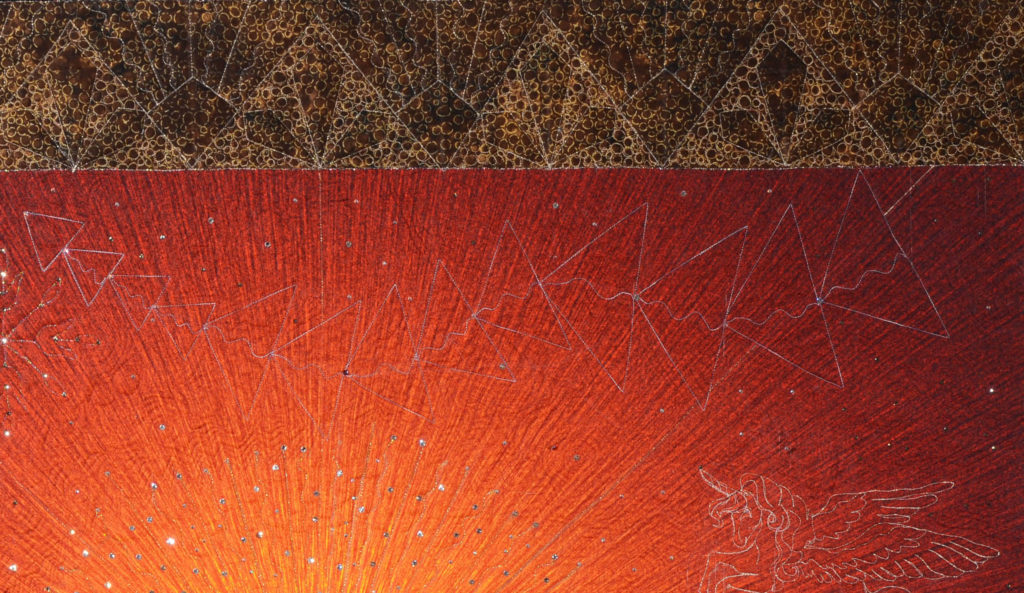 I will tell you that the biggest challenge was coming up with the figures.  I started with prepared for dye cotton fabric and marked the figures on with a simple Fons and Porter dark marking pencil.  Then I colored them using Neocolor water soluble paint crayons and brushed them with water. After that I ironed them dry, thereby heat setting them, and then I placed a bit of wool batting behind the dragon and stitched the outline and the scales.  After that I used some oil paint sticks to burnish the scales of the dragon a little.  Then I thread painted their garments with Superior metallic threads using my BerninaQ20 longarm sitdown.  Finally, I appliqued them to the quilt top.  After sandwiching them, I quilted the figures sections with Superior Monopoly thread, but that was the only place I used monopoly.  I didn’t want to interfere with the thread painting I had done, but they needed quilting for depth of character.  I wonder if the judges realized the difficulty involved there.  Perhaps they did.

And finally, here is a very good picture of the quilt hanging in the show that my friend Cathy Wiggins took.  I think it shows the quilting clearly…in fact the show had it lit just perfectly so the quilting showed well. 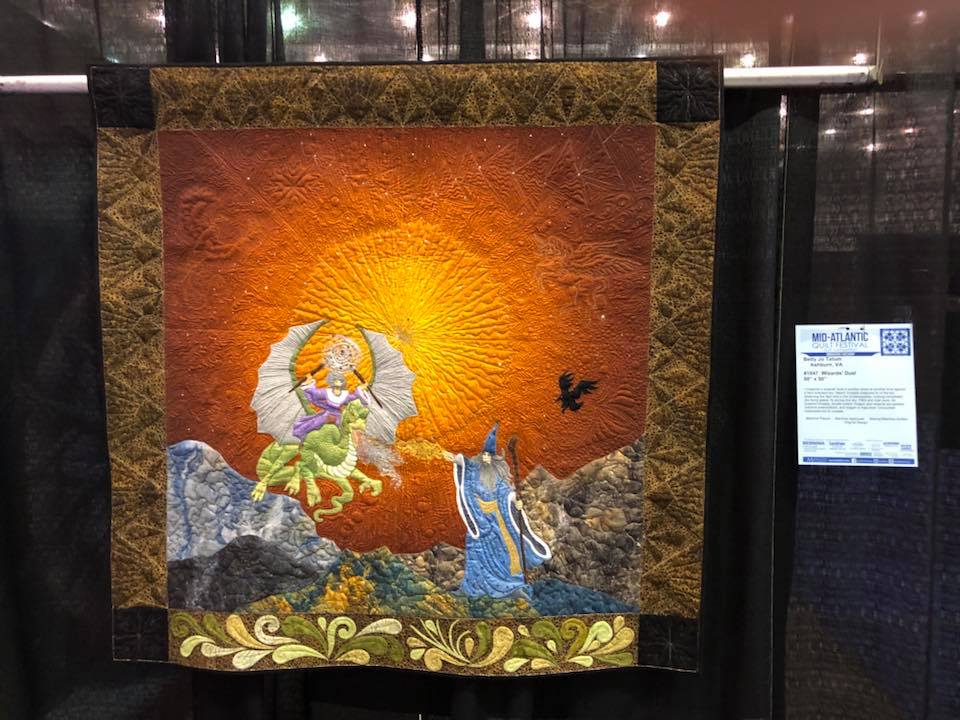 The quilts at the quilt show were unbelievably magnificent.  I do think Wizards’ Duel stands up well in such a show, even if it didn’t receive a ribbon.  As I said, I plan on adding some quilting and highlighting on the rocks section and entering it in other shows.  Maybe it will place after that.  It’s very hard to place in such a show.  The MAQF is becoming a very important and popular show and for good reason…it is fabulous.

Mei-Ling and I attended the fashion show too and spent some time viewing the wearable art competition section at the show.  We were so inspired by this that we decided to try to make a joint entry for the wearable art next year.  Mei-Ling is a small beautifully proportioned woman and we will make it to fit her.  More on that much later.

I came home to find a chipmunk had invaded our home…he came in about an hour after I got home.  That is another story that is still going on .  He’s still here and in one of my studio rooms.  My studio is on the upper level of my town home where my bedroom also is.  It consists of two small bedrooms…Studio Fritz (where my computer/office section is and where my Bernina Q20, named Fritz, sits), Studio Gibbs (where my main fabric, thread, and paint stash, my work tables, and my Bernina 830LE named Gibbs sits), and Studio Betsy (one small side of my bedroom where my Bernina 350 named E. Claire sits where my old Bernina 1230 named Betsy used to sit.  I sold Betsy recently to my student and friend Anita).  The chipmunk has taken up residence in Studio Gibbs (thank goodness not my bedroom!).  So far, the only damage he’s done is knock things over and deposit chipmunk poop in places.  The stash is safely in drawers and the closet where he can’t get to chew or soil and Gibbs is of no interest to him so far.  I am soooooo hopeful of getting him out of there today.  I have a live trap set for him and have tried multiple things, and am trying once more today with the trap and all.  I need my studio back.  I never had this happen before.  Please pray for a successful removal of the chipmunk.  Silly me, I name everything, even a chipmunk I may end up killing…this one is Chippy.  I am so hopeful of not having to kill it to get it out of there.

Sew happy everyone!  You know you can get a basket like device to attach over your dryer vent so chipmunks can’t get in and chew holes in your dryer vent hose.  My son just installed one on our house.  I wish we had done it earlier!!!!

2 thoughts on “The Wizards’ Duel”