Hi everybody!  I have several items of news, which some of you already know about if you read by Facebook posts, but I’ll tell you anyway.

First of all my Embellish This! workshop at G Street Fabrics in Rockville, MD suffered a delay because on my way to the planned workshop my car quit running.  I was on the toll road and right at an exit that went downhill, which was quite a good thing since I was able to coast off the exit ramp onto a generous grassy side and was completely out of harms way.  Turns out it was some kind of air hose had come disconnected for no known reason and that was all.  But the nice AAA tow truck rescuer towed the car and gave me a ride all the way back to my preferred car repair place and they fixed it for nothing and did the annual checkup at the same time, which revealed I needed new brake pads and a new belt of some kind.  I did get those fixed the next day.  So the new class date is now December 15 and there are still places left, and I would like to fill them.  A full class is a happy class!  This class will be totally fun and result in a top that could be made into a nice wall hanging or pillow for a Christmas present and leaves you with a lot of knowledge of the techniques needed to embellish your projects. 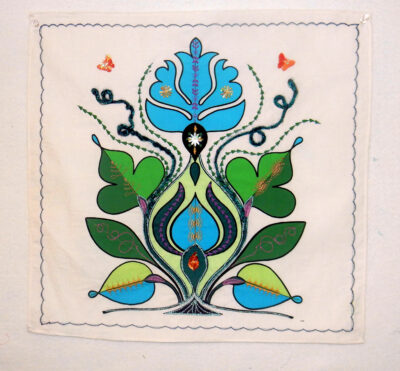 Secondly, I have been, as you know from my past several blogs, making a faux leather, aka “leather” coat for my youngest son David, who is a big and tall man of noble stature.  You can read the past two blogs to get an idea of what this entails, but I will say that it has been the hardest thing I have ever made in my entire sixty plus years of sewing!  And no, it wasn’t difficult just because it is “leather”.  The “leather is fairly easy to sew with, but it is black and slightly shiny and you can’t take anything out if the stitches are going to show.  But I had made the Frankenpattern from three patterns and then did a substantial amount of size changing.

I have only got the hems and the buttons to go on this project. I just had a fitting with David and it looks fabulous, fits perfectly, and I am surprised after all the struggle I had getting it right.  Partly it was difficult because it has been decades since I made anything tailored for a man.  Partly it was difficult because some of the pattern needed so much adjusting.  Partly it was difficult because I made several stupid mistakes (probably lack of practice) that resulted in my having to recut the right front piece along with its pocket pieces, and the collar, which didn’t lay properly (I used the Burda pattern collar and it was probably right if I had been working in wool, but it did not work for “leather”, so I remade it.  But anyway, I am down to the hems and buttons and I am happy.  Only one more day of sewing on it and it will be complete.  I discovered it is hard to work on it beyond 4 or 5 pm  because I have to rely a lot on the light coming in my studio window for this black shiny fabric.  Once the light oustide goes down the artificial light makes it simply too hard to see.  This is why I made the mistake on the front pocket that made me have to remake the front and its pocket, and I was too stubborn to stop sewing.  But I learned the hard way…LOL.

And now for the really fun news.  My quilt The Wizards’ Duel got into Road to California quilt show in Ontario, California, which is relatively close to San Diego where my brother Pat and his wife Carol have one of their homes, and where my nephew Whitlow and his family live.  Now since I had to purchase a new machine the middle of this year (you can read about that in several previous blogs..it was necessary) and have had some additional unexpected expenses this year, I told Pat I was unable to come out to see him and go to the show around that time, but that my quilt had gotten into the show.  The next day, he called me back and let me know that Carol and he were going to give me the plane ticket and most of the expenses for the trip for a nice ten day visit with them!  You could have blown me over with a feather!  He and Carol are going to drive us up to Ontario on Wednesday night before the show and stay all day Thursday and the morning of Friday!  They have been to the show themselves whenever I had a quilt in the show and it will really be fun for us to go together!  So I now have the ticket reservations, we managed to get into one of the preferred hotels, and the tickets for the show.  How about all of that?!  What a lovely present from my dear SIL and brother (it was her idea I was told)! 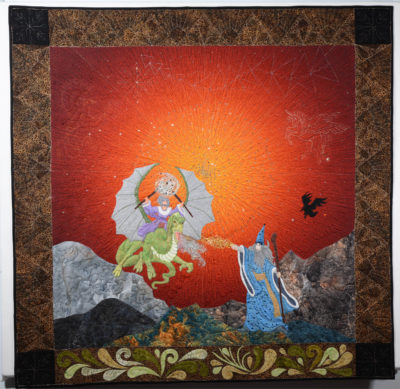 Wizards’ Duel.  Since this picture I have improved the mountainous rocks in the scene per a judge’s suggestion at MAQF.  I then sent it to PA Nat’l Quilt Extravaganza and it won a blue ribbon (Best Interpretation of Theme) and had wonderful comments from the judges.  R2CA will be the third show it will be shown in.  I entered it into several AQS shows but they rejected it from all of them for unknown reasons.  Perhaps I should have had it rephotographed, because the rocks make a difference and the flash made the bottom scroll work too bright.

So in my blog from Nov 2, I so confidently laid out grand plans for November in which I would do a lot of clothing sewing and end up with a refreshment to my wardrobe and David’s coat.  I had thought David’s coat would take about a week and a half, but it has gobbled up all of November.  These things happen, but now I have to decide whether to keep on with the clothing sewing or go back to quilting and fit the clothes in a little at a time across the winter and early spring.  I think I will do a little bit of both, in light of my trip to California and the fact that I have lost a full size over the past year.  If I make one pair of slacks at least I will greatly improve my traveling wardrobe.  I would also benefit if I could fit in a jacket…either the jeans jacket or the faux suede jacket with lots of embroidery.  I’m inclined to do one of those also.  both have embroidery and would be fun to flaunt at the show.  I KNOW they won’t take very long because the patterns are already fitted and don’t require massive refits.  I looked at my wardrobe and figured I can get by with just the slacks addition.  Sew we’ll see.  Nevertheless, I will still make all the items I listed for my November sewing plans but will spread them out over three or so months in between the quilting because I need them.  BUT, I WANT TO FINISH MY MOM’S MEMORY QUILT!!! LOL Not to mention I want to make several additional show quilts for 2020.  We’ll see how it goes.  And don’t forget, I’m working on books.

Sew happy everyone!  Even if you end up having to struggle through a project, make something wonderful for you or your family.  Stretch your sewing and quilting skills a little further.  Send me pictures and I’ll post some of them here if you would like.  Also, you are free to ask me questions if you run into difficulties.  I know a lot (just a fact, not a brag). LOL