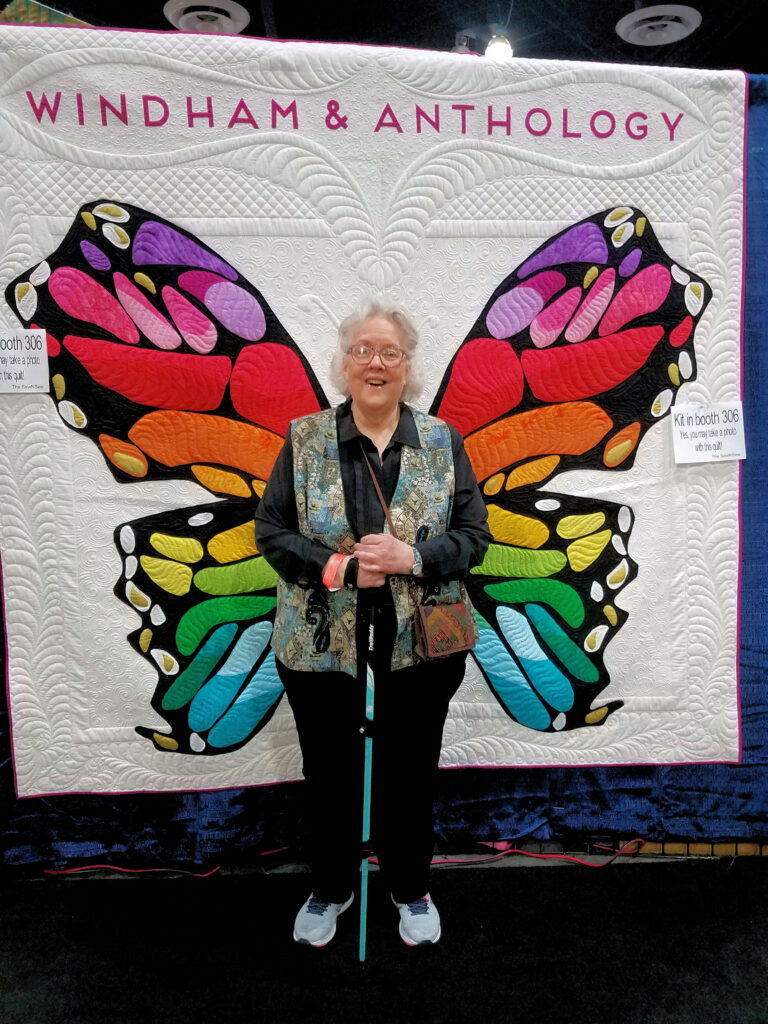 Here I am at Road to California. I’ve grown my wings. LOL

I had a most wonderful trip.  My dear brother Pat and sweet sister-in-law Carol gave me plane tickets to fly from here (northern Virginia) to San Diego and back and then gave me the most lovely time. We went to the Safari Animal Park in San Diego, went up to the Road to CA show and attended that together, then took a delightful drive down through the desert, first to see the amazing rust scuptures at Galleta Meadows and down to Brawley, California in the Imperial Valley. I did some of my growing up in El Centro in the Imperial Valley and it was a pull on my memory heart strings to visit this area of the country again. We stayed there a couple of nights while my brother and nephew went duck hunting (they eat what they shoot and fill their freezers with what the hunt and fish).  Then we drove back to San Diego with a brief drive through El Centro and up through the mountain pass with interesting rock formations.  The following day we went to the San Diego Zoo, then went to a fun local play in Coronado Island, where they have a lovely condo.  So you see, I got to do a lot, walk a lot, see a lot, and visit with my family at the same time.  It was wonderful.

In my estimation there is no zoo or animal park better managed anywhere in the world than the San Diego Zoo and Safari animal park also managed by the SD zoo.  They do a lot to help save endangered animals, make the animals that stay there happy, safe, and well cared for.  It is a great place to see them.  So if you have a chance to go, do so.  I was fortunate in that Pat and Carol are members of the zoo and could go whenever it is open with several guests for no additinal costs.  I did not take any pictures on this entire trip, partly because I had a sore foot and had to use a walking stick, but it worked well.  My brother took some pictures, but mostly you can see a lot of what we saw by Internet links provided below.

Here we took a cart around the park, did about a two plus mile walk around, and skipped the Platypus because it was a holiday and so many people were there.  I enjoyed the plants as much as the animals.  They are wonderful.

Here we first took the shuttle ride around the park, then we walked around, especially concentrating on the birds.  They were fabulous!  We had lunch there and my niece (in-law) joined us for most of our time there.  It was delightful. 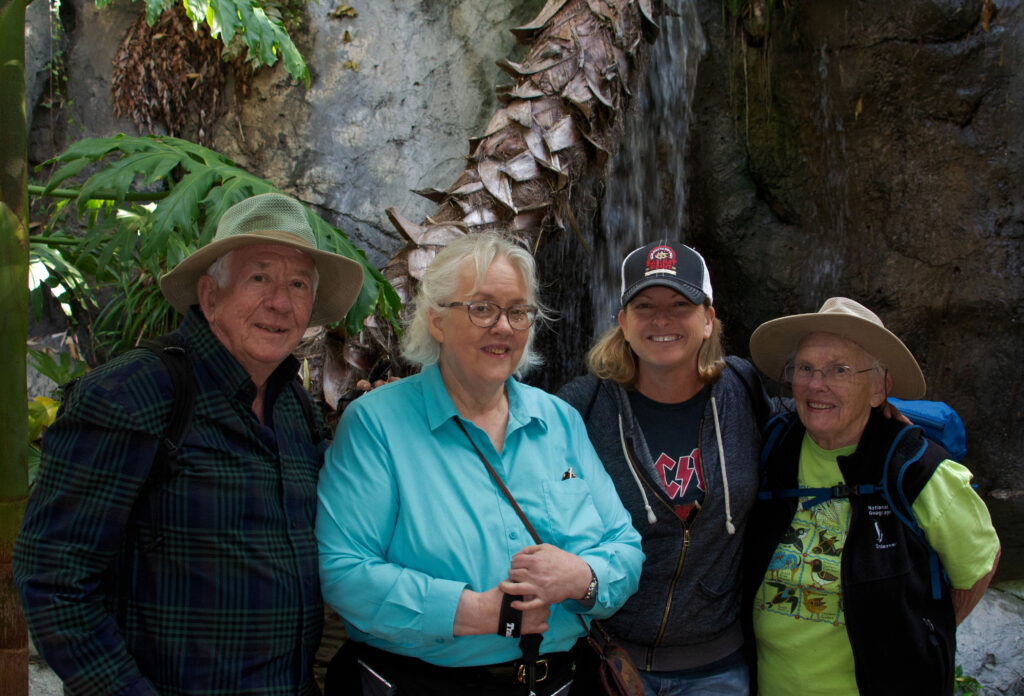 Here we are at the zoo. My brother Pat, me, my niece Melanie, and my SIL Carol.

I know, a lot of you really want to know more about the quilt show.  It was a wonderful show with fabulous quilts.  We toured the whole thing. 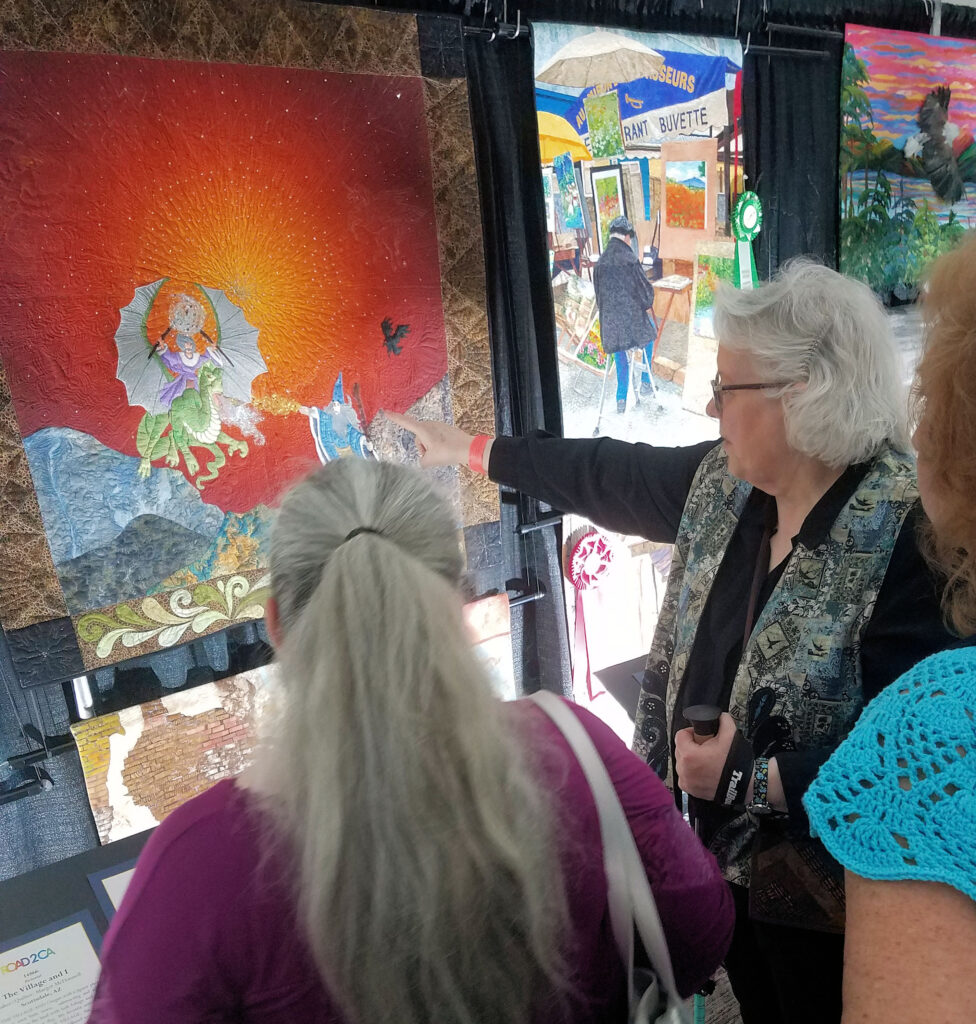 Here I am talking about my quilt The Wizards’ Duel and explaining some of my techniques to some friends of P&C who had come to see the show. I was disappointed in the way the quilt was displayed, crowded together with other quilts with little space around it, and the light is coming from below, which makes the top, nearly invisible creatures totally invisible. Nevertheless, I was happy to have it in the show. 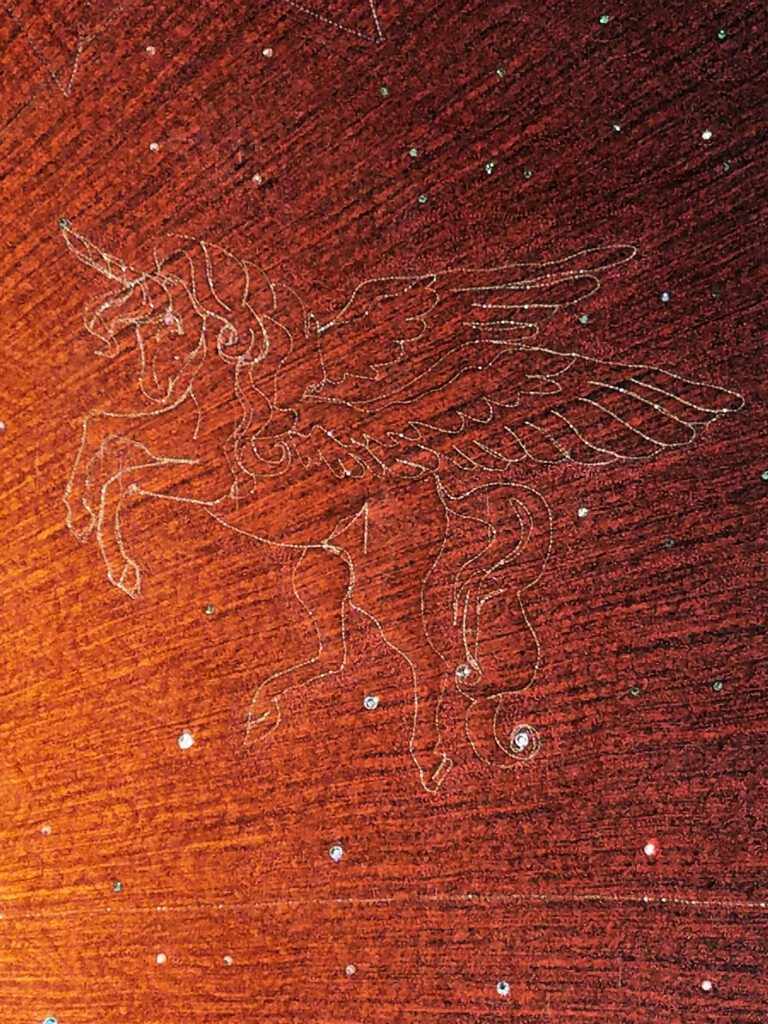 Here’s the Pegasus in the upper right corner of the quilt that you really couldn’t see at the show.  I learned from this that I need to have a stronger values difference in my threads when I want my quilting to show wherever it is displayed.

Here are a couple of links provided by others so you can see some more of the quilts:

Sew I wanted to show Pat and Carol the machines I have in my studio and I took them over to the Bernina booth and showed them the 880 plus and the Q20.  While there, I tried out the quilting hoops that I am considering buying.  I did not buy it then…but I think I will sometime this year. 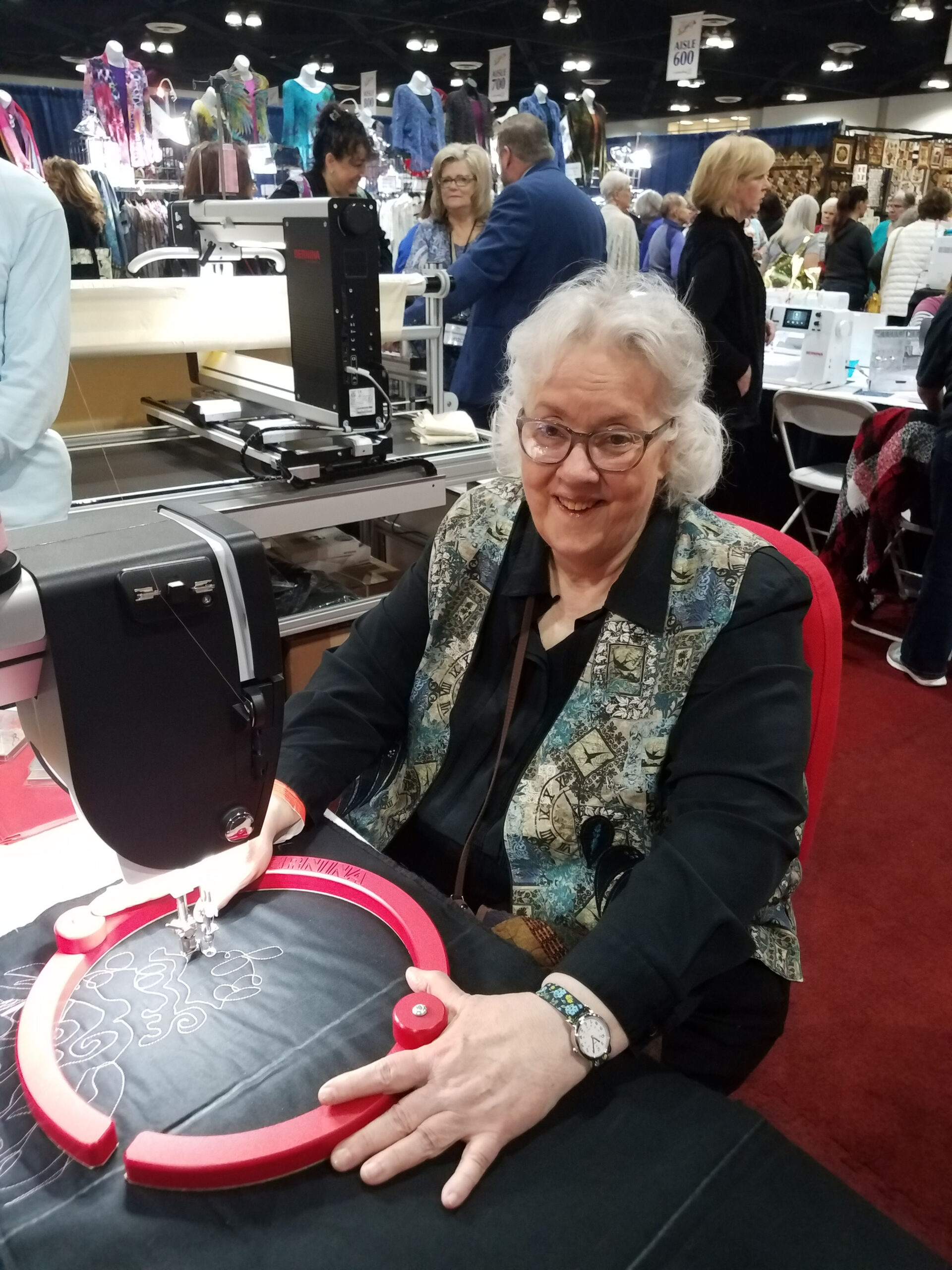 After attending the show, we drove down to the Imperial Valley the next day.  I graduated from high school in El Centro, California, and this drive down through the dessert brought back many memories.  I had not been there since I left to go to college after graduation (my parents moved to Iowa at that time).

On the way to our hotel, we visited 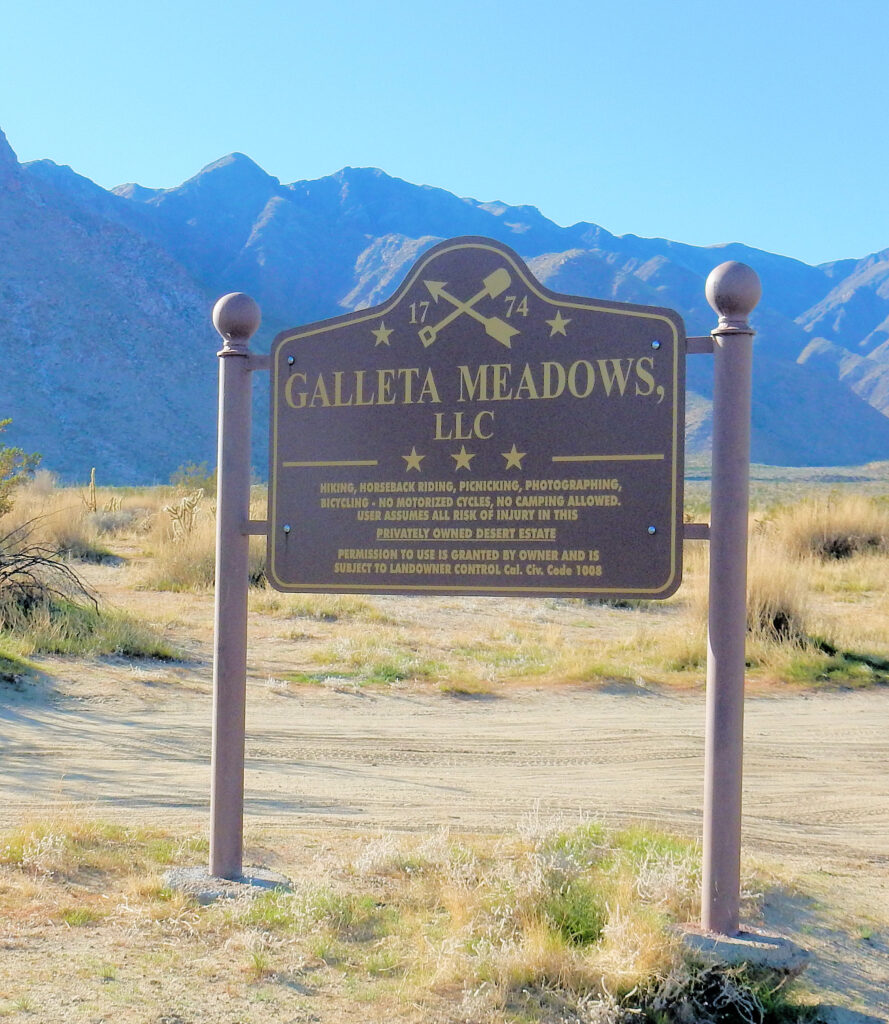 This is Galleta Meadows where the artist, Ricardo Breceda, who creates these magnificent rusty statues displays his work. The owner of the site allows people to drive through and take pictures. They are life size to bigger and are wonderfully done.  This is the only place I took pictures.  Here are a few of the statues.  They were wonderful. 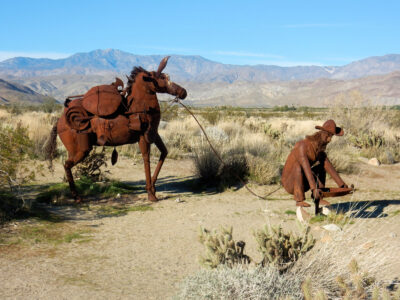 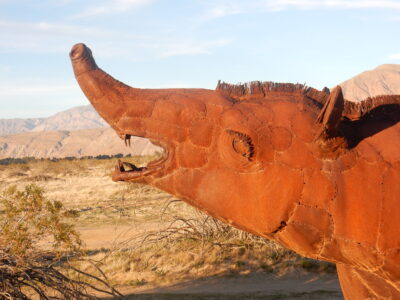 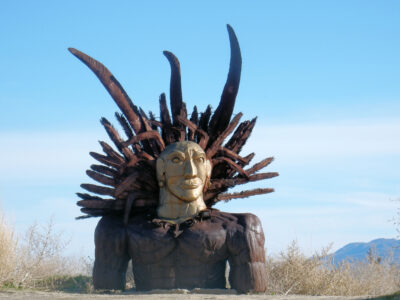 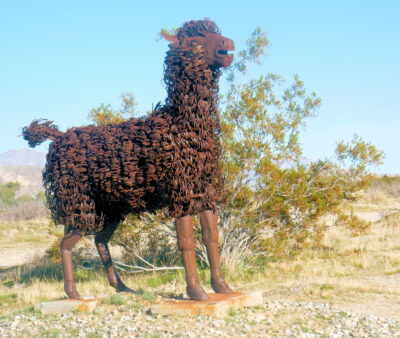 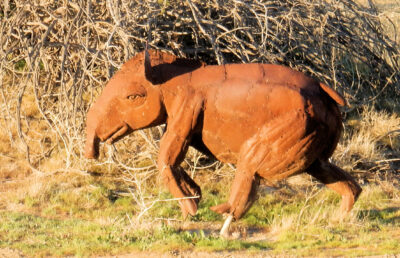 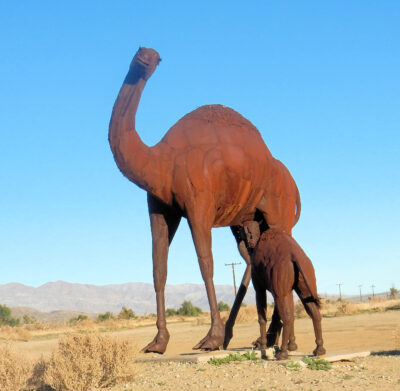 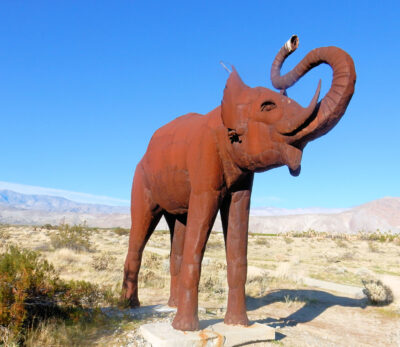 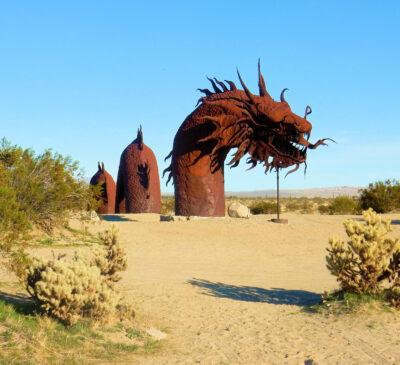 My brother and nephew went duck hunting near the Saltan Sea near Brawley.  They hunt and fish and often fill their freezers for most of their meat supplies during a year.  Pat and Carol also grow fruit at their northern vacation home they built themselves shortly after they were married 54 years ago.  Carol puts the fruit up in the freezer and makes jams and jellies.

So the next day we drove home through the rock-filled mountains, driving first through El Centro.  I was a bit shocked when I saw the gigantuan wind turbines running throughout the beautiful dessert I remembered from my youth as being so gorgeous.  They are soooo big and sooo many that I felt they really greatly marred the pristine nature of the desert. Here is a picture I found of some of them, though they look much smaller here.  Remember when you see it that these turbines are massive…much much larger than most trees.  These big blades only last about 25 years, and cost a lot of energy to produce too.  Surely we can do better. (I am not trying to start a conversation about these here, just providing my kind of somewhat shocked impressions). 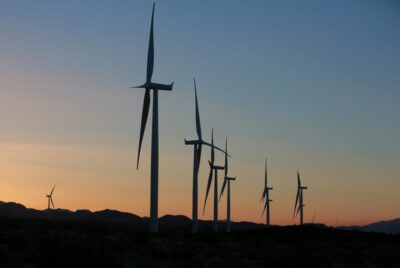 These wind turbines are some of the ones I saw and are each taller than the Empire State Building,

Here is a link to a discussion about how massive these turbines are.  They are apparently planning on making them even larger.

So now I am home safe and sound.  I did pick up a little cold, but that was almost inevitable when I sat just one seat away from a guy who sneezed the whole way home on the plane and never covered his mouth.  Sigh. I’m feeling much better today.  It was a fabulous trip, however, and I had a marvelous time.

Sew happy everyone!  I’m going to get back to work in my studio this week, but my house seems to need some cleaning…I didn’t do much of that before I left.  LOL   My studio calls to me.